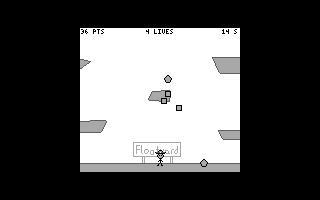 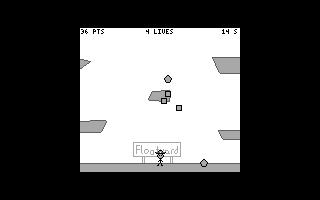 The name says it all. It's a platform game that has you crash into certain things, evade other things, and shoot a third group of things. It's pretty simple, but fun.

Sounds and music taken from soundboy.de and vgmusic.com, respectively.
See the people who made this game and any other games they've worked on >>
Akatosh
Most of the stuff
14 other games: >>
Corner's Shiny (2013 edition)
Stuff
Cheerful Science
Most of the stuff... it's complicated
Me Go 2008!
All except music
Me Go Cannibal Jungle
Characters and whatnot
Me Go Store II - Me Go Away!
Everything except music/half the plot
Washed Ashore Deluxe
Damn near everything
I.S.O.S.
beta testing
Washed Ashore
Everything
Charlie Foxtrot & The Galaxy of Tomorrow
beta testing
Me Go Store!
Please don't hit me.
_Access
Pretty much everything
PMUVCHVT
Creator
KristmasKrisis
Everything
Koffee Krisis
Everything
Bernie
Basic platform engine
3 other games: >>
Reactor 09
Everything except music
Cedric and the Revolution
Everything except music
Deflus Technical Demo
Original verbcoin GUI scripting idea
CodeJunkie
Beta Testing
2 other games: >>
ColourWise
Level Design, Lead Tester
HELP! the game
Backgrounds, beta testing
DoorKnobHandle
Beta Testing
10 other games: >>
The Art of Dying
Game Author
The Bum
German proofreading
KTX-1
Everything (except music)
Zombie Attack (BAKE SALE)
Testing
Draculator II: Byte of the Draculator
beta testing
Indiana Jones™ and the Temple of Spheres
Additional coding
Revelation
Everything including art and music as we
Indiana Jones™ and the Fountain of Youth DEMO
Programming
PiXiA: Rainbow of Havoc
Programmer/Tester
PONG
Everything

"Akatosh's gameboy style game shows promise, though at the time of this review it suffers from the game objects freezing when colliding with the background."