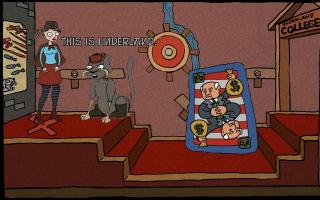 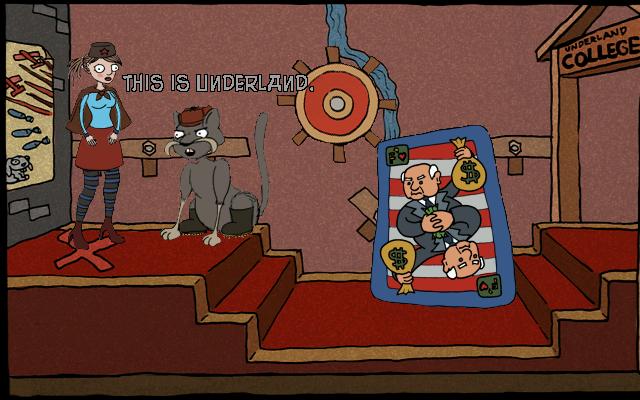 Very simple gameplay-wise, but one of the funniest (and silliest) AGS games I've seen. Good fun! Is being recommended!
2014-03-12 08:46:41 by Myshkin
Yes there's almost no game here but that would be missing the point. A very well executed joke with a great visual style.
2013-04-25 00:32:19 by elegantmechanic
yeah i am from Russia
2012-05-06 00:17:15 by ig299
Obviously somone didn't get the joke.
2009-09-02 03:00:18 by Layabout
This game might be bearable in the Joke Game category, but as a short adventure game it's just dreck. The visuals are commendable and will doubtless inspire gamers to download, but the backgrounds lack depth and do nothing to create an environment that feels 3 dimensional. The voice acting (all characters are voice acted) is pretty bad in terms of audio quality as well as acting talent. This isn't surprising for an amatuer adventure game, but that's why most omit the v.o. Further more, the humor is fairly immature and vaguely offensive, the strategy (as other reviewers mentioned) nonexistent.

If you're looking for a joke game and the idea of Alice in Wonderland juxtaposed with Communist propoganda and Russian stereotypes appeals to you, you might like this game. Other wise, you might want to skip this game.

Umm, yeah, I noticed one bug there, when the Little Girl uses Magic Stick, she closes wrong eye to aim.
And I suggest this be moved to joke game actually.

2008-09-21 14:39:44 by jkohen
One of the best parody game I've ever played. I have to confess that it was totally amazing. I really hope the author of this game would be able to make some more magnificant works someday soon.
2008-09-19 06:37:13 by Eun-young Lee (siryl)
There are 4 more comments that you can see >>>
It certainly wasn't what I was expecting. I'm not even sure if it really counts as a 'game,' honestly - the short length is actually a strength, because the emphasis is on the humor, which lasts until the game is over (and probably wouldn't last much further). I liked it; I wished there was more interactivity, and I really would have liked to see a lot more hotspots and whatnot, and there were a couple of graphical glitches, but these are obviously missing the point of this project. Download it, run it, and you will enjoy yourself.
2008-09-13 01:45:58 by Makeout Patrol
Really funny and a lot of effort put into it. Not really a game, more entertainment - but very enjoyable. You need to have sound on!
Thank you!
2008-09-09 22:26:07 by TassieDevil
This game is a right way to learn how to fight against the capitalism! Join our fight today comrade!

"I Soviet Russia the little Girl in Underland You!"

Is hilarious, and is making me much happiness!

Bonus Unlockable is being unfair to teetotalers!