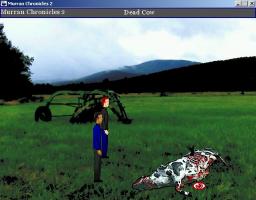 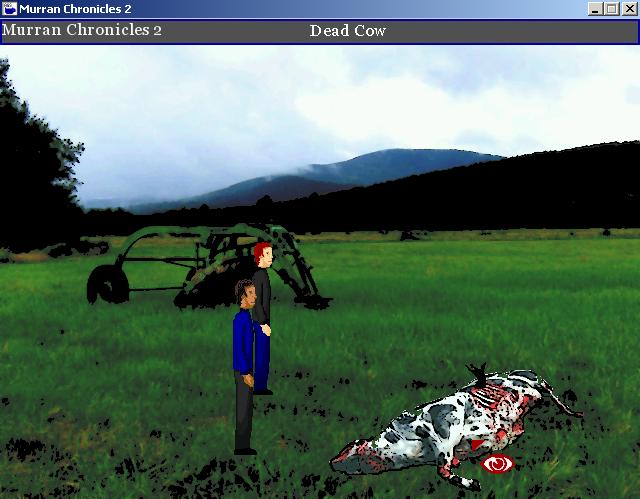 The Murran Chronicles Episode 2: Talons of Terror STORY : After the experience in southern New Jersey, you are moved to another division of the FBI and promoted to special agent status. This new division investigates the stranger cases, and this is one of them. Cattle have been mutilated, taken long distances from their farms and eaten by something. There have been sightings of large creatures in the sky and three unsolved murders within recent months. You are thrust into an investigation ripe with intrigue as you explore Montana while trying to solve the mystery of who or what is killing the cattle, and why three people have turned up dead. Could it be a creature thought extinct millions of years ago? Or do the Sioux Indians have something to do with it? INFO: Talons of Terror is in 640x480 resolution, running in Hi-Color mode, and is a free download. This was my second game using the AGS engine, and is much better (in my opinion) overall than the first game. It is longer, more professional and polished and a much better experience overall. There was rather extensive beta testing on this (special thanks to all the testers who helped iron this thing out, add a few more puzzles, and make it a much more enjoyable experience overall). The game focuses on the experience from a story-telling perspective. I try to be as immersive as possible (with some light hearted quips and such mixed in, along with a bunch of hidden and not so hidden references to Adventure Games of old). I am really proud of this game, and hope you take the time to download and play it. The file size is about 25mb. No voice acting, but maybe in Episode 3. WEBSITE / DOWNLOAD: http://www.billandnicole.net/games
See the people who made this game and any other games they've worked on >>
poc301
Creator
3 other games: >>
Murran Chronicles 3: Lifedrinker of Landsdowne
Author, Background Art, Programming
Mr. Danger's Contest
Murran Chronicles Episode 1 - Jersey Devil *Updated v1.10*
Game Creator
Leon
Lead Tester
16 other games: >>
An Entertaining Speech (A manhunt for a serial killer)
Playtester
This City at Night
Beta-testing
Decisions of the Elders - A Space Quest Prequel - Complete full length retro game
walkthrough part 1
Murran Chronicles 3: Lifedrinker of Landsdowne
Beta Tester
Submerged - LaSol (MAGS)
Testing, translating
Snakes of Avalon
beta-testing
Hitchhiker's Guide To The Galaxy Remake
Proofreading - lead beta-testing
Secret of Hutton: Special Edition
Testing
Living Nightmare Deluxe
Testing
Danny Dread is On Call
Testing
T-REX and MUSCLE SAM big trouble in S.P.F.
walkthrough
DoVaDuLa'S BuRn
Walkthrough
Blue Moon Demo 1.1
testing
Infection - Episode 1 - The Ship
Bug-Hunting
The Dwarven Dagger Of Blitz
beta-tester & concept advisor
Bob escapes
Proofreading
cosmicr
Tester

"The second Murran game brings some improvements to the visuals, but overall the lack of unity between photographic backgrounds and low-res character sprites is still jarring. The games technical aspects have been tightened and refined, and the gameplay benefits from these changes. The writing is still the strongest feature, and those who like a interesting story will no doubt enjoy this."

Really, really loved it! As with part 1, I didn't mind the drawn sprites over photo backgrounds at all. I found this a thoroughly enjoyable game which excels in the aspects of story, dialogues and characters. I can't wait for Episode 3 and I hope that the series won't end there!
2010-01-31 21:25:40 by Valentijn
Good story that is revealed piece by piece. The graphics could be improved and the walking speed tends to be too slow. Nice music. I did like the code puzzle.
2009-09-08 17:28:10 by cat
This is turning out to be a good series. Like its predecessor, this game has a great story and clever puzzles. The mystery unfolds in a satisfying way.

Again, my only major complaints are muddy graphics and a somewhat underdeveloped main character. Other than that, this is great addition to the series, and I can't wait for more!