The Fan Game - The Secret of Monkey Island - RECODED -
(7 downloads) 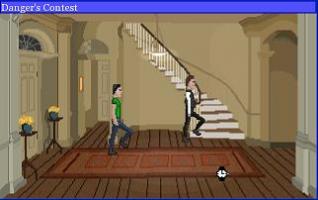 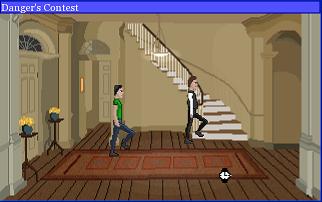 Mr. Danger's Contest This is an entry to the May, 2009 MAGS competition. I took some time off from working on Murran Chronicles #3 to do this light hearted investigative drama/sci-fi/comedy mixture, and really enjoyed it. STORY: You are James McManus, a loner. You receive an invitation from a mysterious Mr. Danger to come and compete in a competition against other 'special people' to inherit his millions of dollars. Not one to pass up that much money, you head to his secluded mansion. Once there, things quickly turn deadly, and you must not only be the winner of the competition, but you must also try to figure out who is killing the competition before they do away with you. INFO: Mr. Danger's Contest is in 640x400 resolution (natively 320x200, but my fonts look better in the larger resolution). And yes, all those awesome sound effects and all the music were all made by me and my trusty PC microphone :)
See the people who made this game and any other games they've worked on >>
poc301
3 other games: >>
Murran Chronicles 3: Lifedrinker of Landsdowne
Author, Background Art, Programming
Murran Chronicles Episode 2: Talons of Terror
Creator
Murran Chronicles Episode 1 - Jersey Devil *Updated v1.10*
Game Creator

Story may sound like a cliche but it is in fact an interesting premise and well executed. To say that there are areas that could be improved would simply be picky seeing as this is a MAGS game, definitely recommended.

2009-06-03 09:58:16 by Intense Degree (McBoy)
Although it may sound cliché, the story is quite good. The graphics are nice if you consider that it is a MAGS game. Most of the puzzles are well done and the special power makes them more interesting.
Music and sounds are very unique. If you don't like them you can switch of your loudspeaker without missing important clues.
Took me about 2 hours to complete.

2009-06-03 09:25:22 by cat
This was an amazing game. The music and sound effects were very original. I never played a game like that before. I recommend this to everyone!
2009-06-02 15:42:53 by Scripthead
Great "sci-fi supernatural detective thriller" game.
Reminds me a bit of Agatha Christie.
A whodunit, but with a twist: starring people with supernatural abilities.
Nice puzzles, nice graphics and weird sounds.
Gives about 2 or 3 hours of game play.
Highly recommend!!!