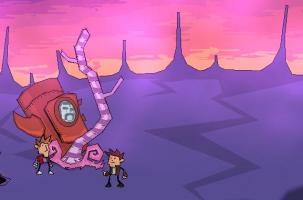 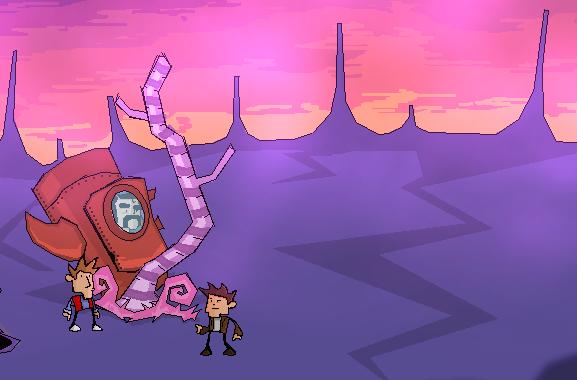 It's a comedy adventure game! Sit back, relax, and put your mind to work solving puzzles, and reading funny dialogue. It's like a book, only good!

"Very funny and British satire of the adventure game genre, especially the LucasArts branch of it. Long, non-linear, and extra tightly designed puzzle wise. For those who care - contains an unlimited number of custom-written comments to player interactions."

They sell this game for half what it's worth, and I say that as someone who rarely spends money on.... well, anything. But I'd have paid twice the price and still been happy. The writing is about seven leagues beyond hilarious, and the puzzles are simply brilliant. The artistic style is simple but captivating, and the music is catchy. A phenomenal game all around.
2010-03-09 02:58:19 by Baron (vanwijst)
I had to buy this after playing BTDT. This game is worth every penny, and then some! It's funny as hell, and the designers paid more attention to detail in the scripting and making of this AGS game than any other I've seen thus far.

I don't buy many games, but this was totally worth the money. Just think--bars sell beers for more than you'd pay for this game, and trust me, a beer won't provide you with nearly the level of enjoyment as this!

The visuals are quirky, original, consistent and clear. The puzzles are funny, relevant to the plot, the perfect length, and with the difficulty spot on!

If this game doesn't get a five-cup rating, I'll, I'll... Well, I'll get as annoyed as I did when Ben There, Dan That! didn't get four!

2009-07-09 14:25:23 by Mark (markbilly)
And the visual side of it is just lovely!
2009-07-02 13:41:11 by Ray (rascal)
I'm reffering to the commercial full version, which I got for about 4,50 € and which is well worth it:
The complexity of the puzzles in this game really is amazing (while there are ample subtle and not so subtle hints to help the player figure thing out), the music is great, the setting is weird beyond description, the humour reaches from funny to abysmal, but the overall fun factor is close to unbeatable!
Keep up the good work, mates!

By the way, the gameworld-within-the-gameworld thingy is just as great as good old Infocom's puzzles in Hitchhiker's Guide to the Galaxy by Douglas Adams and Steve Meretzky!
Nuff said.