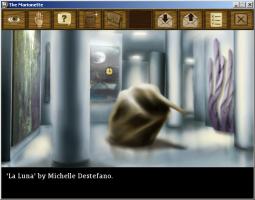 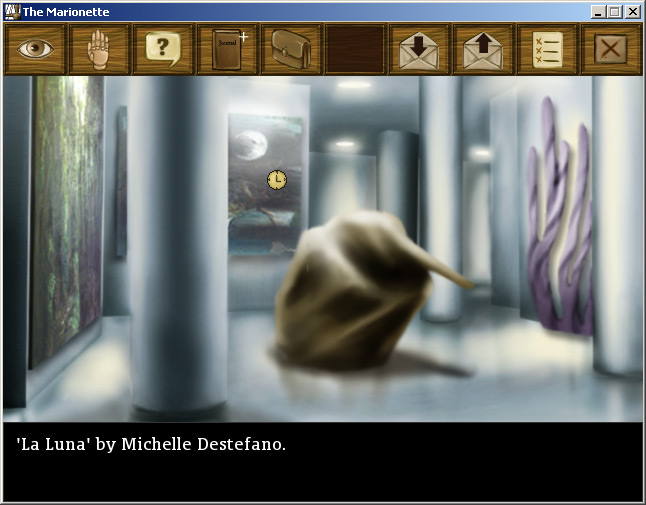 Martin is a bachelor and sculptor struggling to make a living in the city. One evening he finds in his mail a strange white envelope, unmarked except for the number "1011" written in the top right corner. Inside is a photograph of a room with ropes hanging from the ceiling. He has barely registered that fact when he is struck unconscious, and later wakes to find himself in completely unfamiliar surroundings, with only a house nearby to offer any hope of help...
See the people who made this game and any other games they've worked on >>
auriond

"A solid gothic adventure game in the tradition of Phantasmagoria, The Marionette weaves an interesting if not wholly unpredictable mystery around a captured sculptor, who must play by his host's rules if he is to discover the truth. The relatively straightforward puzzles contribute to a rather short adventure, though with multiple endings and cutscenes there is enough content to keep you interested."

A strange, sad, beauiful game that pushes the boundaries of what can be achieved in terms of mood and emotion in an adventure game. A very impressive effort.

Most of the puzzles are fairly easy, except for the final few which are quite a challenge. Graphics and music were both superb.

2009-12-27 23:00:48 by Boost (BoosterBronze)
Storytelling in AGS brought to a unique level. Very good use of cutscenes. I was very impressed.
2009-12-24 01:38:02 by sys_err
Wow. Top quality graphics. I'm impressed (and just a bit jealous!) The music was also great, and the whole thing together was creepy and atmospheric. Just what I'd expect from a ghostly revenge story.

The puzzles were a little strange at times, and I'm not quite sure if I got the whole story. I did get stuck on the part where the ghost is coming after you and you have to set the traps, and had to look up a walkthrough, so I know there are alternative endings. I got about 3 of them, but they all seemed a bit anticlimatic.

Some of the items seemed a bit random, like the to do list, but were explained in one of the endings (sort of).

Still, this was really neat, and is one of those games that makes you wanting more. Sequel, or at least another awesome game please?

2009-12-20 02:28:39 by chompermom
The visuals (especially the cutscenes) are defenitely Marionette's strongest suit- within a few moments you're THERE. The atmosphere's nice and glum, the story flows easily, and all too soon it's over. I enjoyed the game a lot, though I had expected a little more challenge, puzzle-wise. The plot fails to surprise too much, yes, but that'S not a bad thing: Marionette showcases how well a familiar plot/setting/theme can capture the player when done as well as in this lil' ghost tale!
2009-12-16 11:30:07 by Ghost
Very polished and quite atmospheric little ghost story. The plot is fairly predictable throughout, but effort has been put into establishing the characters, which works to the game's advantage. The puzzles are structured as a series of escape-the-room puzzles, with a lot of code breaking and finding hidden doors--nothing too exciting, but generally providing a good motivation to explore. Voice acting would have pushed it up a notch, and may be added to a future release.

Overall, the game is an enjoyable way to spend an hour or so, even if there's little special to separate it from the pack.

2009-11-29 21:25:27 by Snarky
This game is interesting, strange, relaxing and chalenging all at the same time. I had fun thanks.
2009-11-17 01:41:37 by gimble630 (Gimble630)
A nice, relaxing game. From the technical point of view is outstanding: the cutscenes are beautiful (probably the best ever seen in an AGS game) and all the art is of high quality (and more importantly, consistent).
The story immediately grabs you (even though some plot devices may look a bit cliché) and puzzles are fairly simple.
For these reasons the Marionette feels more like an interactive novel that an adventure. Don't play it like hardcore gamer but take your time, follow the story and look for all the endings: you will enjoy it for sure.