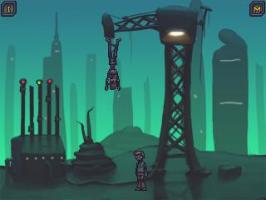 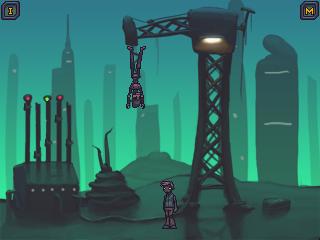 "Featherweight surrounds the adventure of Thadd, a lowly resistance scout (featherweight) who must try (and fail, repeatedly) to rescue a fellow member who has been imprisoned by a robot army. While little backstory is revealed, the game gives a sense of a greater story to be told; unfortunately, some of the puzzles in the game seem downright strange and counter-productive (use an explosive to get a bullet?). Compounding this, other inventory items seem just as useful to a purpose as others, making many of the solutions seem hit or miss. Still, if you can look past some odd puzzles you'll find a lot to like in Featherweight."

Puzzles weren't too annoying because there were no pixel hunting or large number of inventory items. Another thought, puzzles were pretty challenging although the game hasn't got any annoying puzzle. That means i liked it.

I can't say any bad thing to graphs they are obviously amazing. A couple of music tracks doesn't fit with the atmosphere but it's ok. Not everything has to be perfect.

I agree with others, the puzzles were a low note in this game. On the other hand, I feel the repetitive nature of getting caught and escaping was part of the whole.

2009-11-22 18:29:44 by jkohen
Fantastic short game. Had to use hints from forum once but that's just because I'd missed something. Really wish there had been more to play to be honest! :) Great stuff! :)
2009-11-22 15:51:09 by Chris G UK (Gledster)
the same figures like in heed. is there a connetion? the game is very good, interesting music, graphics excellent, the puzzles are okay. too much logical riddles, i would wish more story riddles. all in all once again a ben master work. but i think your next game should be something different. not too different, but a kind of development.

2009-11-16 19:16:47 by Arj0n
There are 2 more comments that you can see >>>
Another superb short game from Ben304. How do they churn out these mini-masterpieces so quickly? Like Ben's other games, the story is thought provoking, the graphics are great and the music is odd but appropriate for the story. I needed several do-overs for some of the puzzles but they are all logical and motivated me to keep playing. This is a good one, folks.
2009-11-15 22:40:29 by AndyfromVA
Another beautiful, athmospheric, short game by Ben. Reminds me very much of 'Heed'.

But I didn't enjoy the puzzles that much compared to the other games. For my taste there is too much trial-and-error in the puzzles with different types of mashines standing arround.