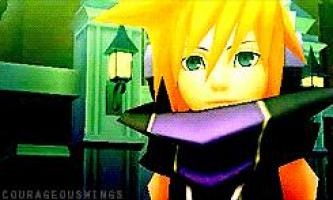 NNT complete book:Neku's personality is rather unsociable. He has a lot of difficulty understanding people, so he always keeps to himself. Unfortunately, this results in his dislike of dealing with other people. His opinion of others is so low that he tends to see people only for their use. Neku refuses company, as he feels that friends only drag him down, cause him pain when they fail him and make him feel like "unnecessary baggage" to them. To him, society is simply an annoyance that forces their values on him, pester him and expect him to do things he doesn't want to do. As such, he admires the designer CAT for his/her "do what you want, when you want, where you want" motto. Though at first his negative world view keeps his friends alienated despite their best efforts, Neku slowly softens as he listens to the advice of everybody around him. He becomes more open and trustful of others as he gets to know people like Shiki, Joshua, Beat, Rhyme, Hanekoma and others like sora from kingdom hearts. As time passes, he begins to understand more about others and believes in his friends. In the parallel universe of "Another Day(neku's new day)", Neku did have one friend, a classmate of his. However, this friend was killed in a car accident en route to meet Neku at Udagawa. Neku blamed himself for his friend's death, as he was the one who asked to meet. While it is not stated that the "main" Neku had this experience, the Secret Report for Book 2, chap 1 notes that Neku has had some sort of "trauma" in his past. Additionally, when Rhyme is erased, Neku says,"I feel like crap. This is just like that time.", supporting the notion that he has experienced the death of someone close to him. He constantly feels that he's becoming emotionally injured in this chapter
See the people who made this game and any other games they've worked on >>
Icey
game & story & art(1/2)
33 other games: >>
Mythical Gambit Flawless Fatality
Game & Art
Mythical Gambit Tales of the OceanSpirit[Demo]
all
[Into the series] Shogin Crystal Legends B3
game + art
[Into the series] Shogin Crystal Legends B2
Game & Character Design
OSD Last Boss DX
DX version/ART/coding
OSD vs Cloud Strife
Everything
[Into the series] Pub Master Quest 3
Director + Character Designer
[Into the series] Mythical Gambit
[Into the series] Portable Knights: PMQ
Game + Story design
[Into the series] OceanSpirit Dennis
EXTRA + everything else
AGS Coloseum Demo
Game design, Character Design, code.
OSD LAST BOSS Dennis Returns 1.5 HD ReMIX
ART, VA
OSD Sorta 99% 著名 [MAGS]
Draculator II: Byte of the Draculator
voice acting, GUI design, character design
OceanSpirit Dennis: Scourge of the underworld HD
OSD Archipelago Adventures 1
Playtesting
[Into the series] PMQ Legends
Everything
Oceanspirit Dennis: Rise of the Spirit[Demo]
Game
Pub master quest Legends v3.0
Game,Story,Art,Character design
Oceanspirit Dennis: The Full Name Of This Game Won't Fit In The Subject Line!!1
Inspiration, Voice (OSD)
[Into the series]Carrot Adventures PMQ
game & story
Concurrence (MAGS)
Testing
Oceanspirit Dennis 3D [MAGS]
Game design
Oceanspirit Dennis 2
Game
OceanSpirit Dennis 2 beta
OSD: The lost world[FULL]
Story
[Into the series] Pub master quest.2
2014 remake
Oceanspirit Dennis: Scourge of the Underworld
story & game
[Into the series] PMQ Spin-offs
game & story2
[Into the series] Shogin Crystal Legends B1
neku's new trip (chap1)
story
final fantasy XV fanmade
[Into the series] Pub master quest
everything
square enix
story & art(2/2)
Jupiter
Tmobile
net wave feature
Moogle
video
7 other games: >>
OSD Last Boss DX
stuff from normal version
[Into the series] OceanSpirit Dennis
Game plot & Game coding
AGS Coloseum Demo
Advertise
OSD LAST BOSS Dennis Returns 1.5 HD ReMIX
story
Pub master quest Legends v3.0
assisting with net setup.
[Into the series]Carrot Adventures PMQ
small things
OSD: The lost world[FULL]
Halloween idea for Dennis