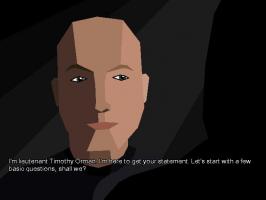 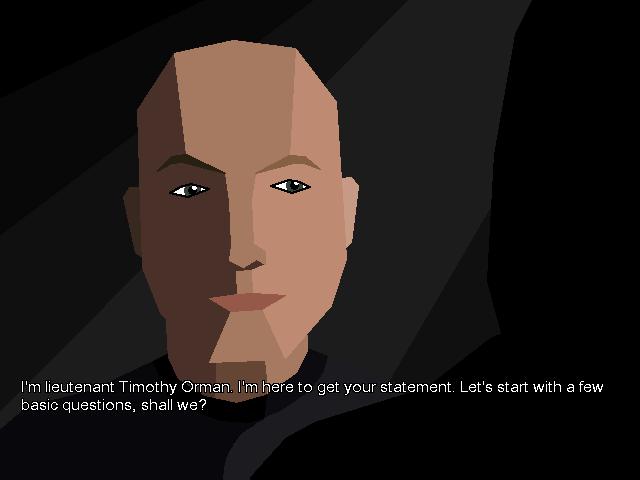 Winner of the sixth One Room One Week competition.

The investigation of a wave of kidnappings is going nowhere. One day someone claiming to be an eyewitness to one of the kidnappings approaches the local police department. It's time to find out what he knows...

Features motion-captured facial animation and full voice acting! Just keep in mind that neither of the voice actors are native English speakers. Additional game download mirror: http://www.mediafire.com/?gk76rmcat476fyx A short making of video can be downloaded here:

"As an experiment in motion capture in the tradition of Another World, By the Numbers shows an exceptional amount of effort on the part of the author. This effort shines through in the various facial features and lip synching of the characters, though it comes at a price: the narrative itself is very gameplay-light and the ending can often be confusing even when you think you've made all the right choices. Overall, though, By the Numbers is a solid example of what can be achieved in just seven days with AGS and some assorted tools."

Wow! A rather tense investigation. It can be quite hard to figure out if you are asking the right questions, but I suppose that is true to real life. I wish there were more games like this :)
2014-03-27 22:20:39 by Andy
The animation really is something; it even manages to be quite subtle sometimes. I felt the interrogator's voice acting wasn't great, and it somewhat distracted from the experience. The story was alright; nice atmosphere and use of music.

Still, definitely worth it for the animation alone.

But lowerside is that your 2D drawings look really worse than your 3D animation.

2010-09-02 09:08:45 by Piotr OBKINSKI (leshaussebons)
Very impressive as a tech demo + solid voice acting and intense atmosphere. And all created within a week! Not really a game though.

So now I demand a huge, amazingly playable game using this mo-cap/vector technology!