The Sacred Tablets of Tibet 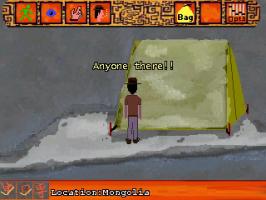 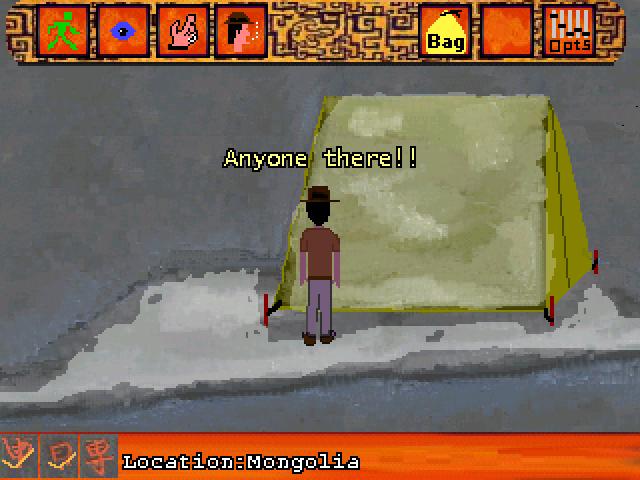 V1.4 (frequently tweaked) 1500 B.C. The God of Hope gave three Sacred Tablets of enlightenment to the Tibetan Holy Secret Society. Each Sacred Tablet had the power to bring peace and hope to mankind through spiritual and astral projections. They could not be used to hurt mankind directly, but in the wrong hands they could open portals to other dimensions and bring forth demonic creatures of unspeakable evil. Wang the Merciless, a feared Tibetan Warlord, sought out the Sacred Tablets to harness their power and use it for his own ends! Mandrin, the Tibetan Secret Society Master Priest, knew that if Wang the Merciless found the Sacred Tablets he would unleash horror on the world. This could not be allowed to happen!! Faced with this threat, Mandrin decided to separate the Sacred Tablets and hide each one in a secret location. 2012 A.D. (Present Day) The Secret Society has spent centuries gathering information about the whereabouts of each of the Sacred Tablets. It is finally time to bring them home. They need someone from the Holy Order to go out and retrieve the Tablets. They need someone with courage and strength. They need you, Jonesy Smith. An airplane has been chartered for your use. Now bring those Tablets home! There is a twist at the end! GAME INFO: * Video Intro Story * Flag AutoSaves (Flags in various places. Walk into flag to AutoSave.) * Delete AutoSaves option. * 3 Location Chapters: * Chapter 1: Sudan 'Temple of Laketa' * Chapter 2: India 'Punjab rock' * Chapter 3: Mongolia 'The Golden Gate' * Chapters can be done in any order. PLAY INCLUDES: * Riding a Camel and an Elephant. * Solving a mystery in a waterfall. * Finding a Red Oasis with strange drinking effects. * Confronting a Tiger and a Wolf. * Solving Word puzzles. * Getting dope for a Fakir. * Hearing about a mysterious 'Wind Dragon'. * Finding a way down a snow slope. * Watching the Indian rope trick. * Who is the man frozen in a block of ice ? * Who is Mr X ? SPECS: Zipped Size: 44.2 Mbs Unzipped Size: 79.7 Mbs 16 Bit colour. 320 x 240 resolution. Direct Draw 5. Music and Sound included. CONTROLS: Primary Mouse To view Inventory and Contol Panel hover mouse at the top of the screen.
See the people who made this game and any other games they've worked on >>
steptoe
Everything
9 other games: >>
The Visitor 2
Testing
The Shadow Avenger: It's personal!
Everything
Potato Head - Sweet Attack!
Everything
Murder Most Grisly!! Whodunit?
Everything
Jetpack Sam 1
Everything
SPIT BOY V2.1
Everything
MONEY CAB
Everything
Sinbad: Island of Korkus
Everything
Very Bad Taste: Dels don't hide!
Everything
NickyNyce
Testing
14 other games: >>
An Entertaining Speech (A manhunt for a serial killer)
Playtester
Captain Disaster in: Death Has A Million Stomping Boots
Additional graphics
The Unprintable MAGENTA
beta testing
Hjarta
Testing
Camp 1
Testing
The Visitor 3
Everything but music
Conspirocracy
Background Art, Testing
Ancient Aliens - The Roots of Sound
Additional Game Design and Testing
Gray
beta testing
The Visitor 2
Everything
Hubris - a Popular Pub Pastime
Testing
The Dwarven Dagger of Blitz - Chapter 2
testing
11-11-11
Testing
The Visitor
Everything
Nedshi
Pt Testing + Video Dialog
1 other games: >>
Murder Most Grisly!! Whodunit?
Proofreading/testing

This game was a fun, old school, Indie-type of adventure. I got to travel to new places, sing strange chants, solve logical puzzles and ride a strutting camel. What more could I want? Nothing... except a sequel!
2012-04-09 19:01:48 by lucy dark (lucydark)
This was a pretty fun spoof game- Not very tricky as far as puzzles go, or incredibly absorbing, but plenty of good adventure game humor.

Also, sick of completing a fetch quest and then spending 10 minutes clicking through screens to deliver the precious cargo? You never have to deal with that in this game, due to the judicious use of cutscenes.