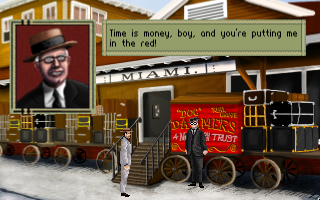 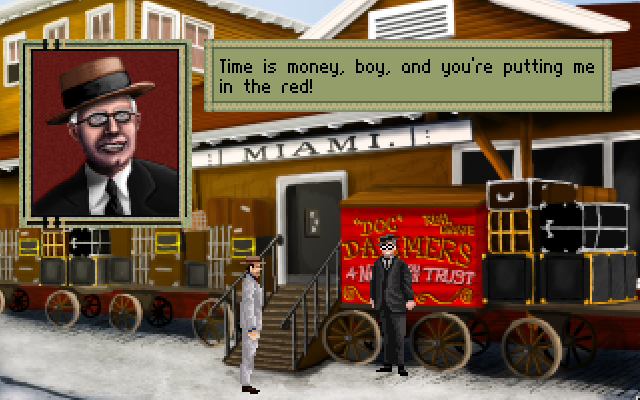 A Golden Wake is a commercial game.

"A Golden Wake is a fun game with an interesting setting accompanied by a fun 1920s jazz soundtrack and some nice visuals. Although the historical aspect may not be every player's blue cup of tea, the game features some memorable NPCs, most of whom based on real people and brought to life with some mostly top-notch voice acting. The traditional adventure puzzles are on the easy side but AGW's unique persuasion dialogue puzzles are a welcome challenge. Good stuff."

I just played through A Golden Wake for the first time and thoroughly enjoyed it! Great atmosphere.
2019-03-26 06:00:36 by Durq
I liked the new ideas (working out the right house to sell to different prospective buyers) than the more traditional AG elements in this particular game. Lots of good ideas, interesting setting. Some infuriating sequences (yes plane stunt I'm looking at you!) but overall enjoyable.
2016-03-23 22:49:54 by CaptainD
Got back to this one and finished it, very enjoyable!
I liked the change of situation Alfie was placed in as you progress through the years. The puzzles were good but pretty easy in general, the seller's intuition stuff was great (would liked to have seen more of that!). This game is more about telling an entertaining story than anything, the true-story factor is what sold this game as a winner to me in the end.
2015-08-19 14:59:49 by MiteWiseacreLives!
This game reminds me of The Wolf of Wall Street at first, real estate style (a film that I'm not too keen on), but like many storylines, there are quite a few twists in the plot, and the theme draws away from the movie, and it makes itself it's own.

The puzzles require some thought, but are never too taxing, and sometimes you will have to prove your persuasive prowess.

What really drew me in was the attractive display of visual scenery and animations, and asking myself, what will become of a one Mr. Alfie Banks?