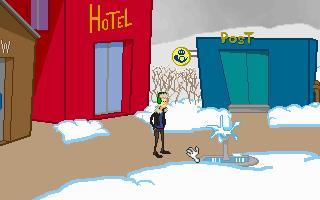 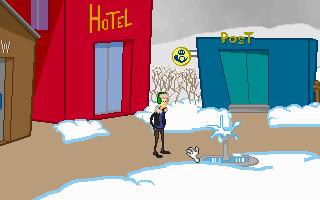 Imagine a plot that's been used so much it always is considered a parody nowadays.. It's a mad scientist who's detroying the world! It feautures Dieter Kartoffelbrei as the hero, Dr. Really Really Evil Ed as the mad scientist and an amount of other characters which will mock you on your quest.
See the people who made this game and any other games they've worked on >>
2ma2
3 other games: >>
Nelly Cootalot: Spoonbeaks Ahoy!
Open Source Verb Coin Script
Platformerius: The Ninja Incident
Who killed Kenny Rogers?

I reported the broken link. In the meantime , I suggest people get it from the archives link.

I haven't played this game in a long time so I don't remember anything about the gameplay , but the screenshot lets us know how it looks. Permanent Daylight is a good title.

He, he - I advertised it pretty well. (I didn't get paid though) LOL, anyways, this was a good game and it's worth my free advertisement.

As soon as I watched the intro sequence I knew I was in for a treat.
I rarely laughed that hard while playing an adventure game.
The humour isnÂ´t up to par for the rest of the game but itÂ´s still funny enough to make you smirk or giggle here and then.
The puzzles are easy to cope with (if you donÂ´t overlook an exit to a certain area ...).

I also canÂ´t say anything negative about the graphics.
Especially the character detail and animations deserve commendation.

Favourite parts:
The intro (LOL !!!)
"Live And Let Die"
The hitchhiker
The confrontation with "Dr. Really Really Evil Ed "
The epilogue (what happened to ...)