The Execution of Anne Boleyn
(3 downloads)

Blackudder: To doubloon or not to doubloon 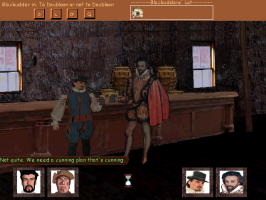 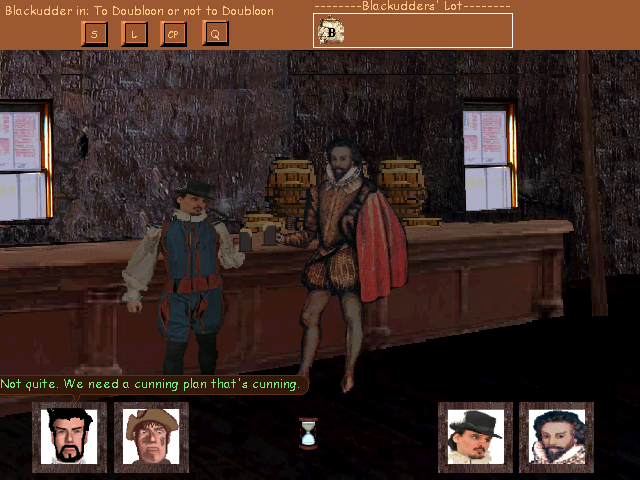 Download Options for Blackudder: To doubloon or not to doubloon

MAG winner June 2016... My MAG entry for June is based on fact of an era when Queen Elizabeth I commissioned Sir Francis Drake to plunder the sunken / destroyed Spanish galleons in the West Indies (Carribean) and bring their treasures back to England. Uses d3d 640 x 480 16 bit colur Blackudder: To doubloon or not to doubloon Of course this is just the background setting for the story and it did not anticipate that one such person, namely Edmund Blackudder would become involved with the plundering of these sunken galleons. With her majesty's birthday only 8 months away and Blackudder being skint, he needs a cunning plan that's cunning else he will get the 'chop'! He overhears Sir Francis Drake blabbing on about plundering treasure from the Spanish galleons in the West Indies. Blackudder decides to beat Drake to the West Indies and pinch some of the Spanish treasures for himself therby affording the Queen a birthday present and will assure him a place in her affections. He also hopes she will make him a Lord (he already presumes the title of Lord)....and above all: spare him the 'chop'! Of course things do not start according to plan when Baldick (Blackudders' put-upon sidekick) tells Blackudder that his boat has been repossessed! Follow Blackudders' exploits on the high seas with a twist... Catchy parady song to sing along to. Guitar and vocals: threelegsoman (YouTube)
See the people who made this game and any other games they've worked on >>
Slasher
Everything except music
67 other games: >>
Perceptions
Creator and Scripter
We'll meet again...
Story and Creator
Skyfall
Creator and Scripter
Sandi Knievel: Stunt Rider
Creator and scripter
Frozen Kingdom
Everything
Fritz
Everything
Headbanger's Heaven - A Rock & Roll Adventure
Game Tester
Fashion Girl
Everything
Create your own game: Your dreamy Christmas
Everything
Night Witches: Women of the clouds
Everything
Desmond: The 'Thing' from another world!
Story, Characters, Graphics and Dialogs
Maelstrom Obscura: Case 1
Story, Scripting, Dialogs, Implementation. Sound editor and Odd-Job man...
Cave of Avarice
Puzzle design, writing and testing
New Kid Gotta Steal Somethin'
Testing
Ego in Planet of the Apes
Testing
Santa and the orphanage
Everything
Scarecrow and his quest for a brain
Everything
Dr. Chuckles' miniature world of madness.
Scripting, dialogs
Jason and the Golden Apple
Everything
The Campaign Of Daphne White
Story, graphics and scripting.
Stories of the unexpected: 'Until further notice'
Everything
Groundhog
Everything
The Rat Pack Do Cheesy Castle
Everything
When Time Stops
Everything
FrightFest: Dracula vs Frankenstein vs The Mummy
Everything
Finger of suspicion
Story and scripting
Fallen Hero
Story and scripting
Captain Disaster in: Death Has A Million Stomping Boots
Sound engineering support
It's a Bugs Life
Everything
Conspiracy: Below-Zero
Story, backgrounds and scripting
The Gourmet
Everything
Fearaphobia
Everything
The Execution of Anne Boleyn
Testing
Fred and Barney meet the future
Everything
10 Ways From Sunday
Voice Acting
Noah's Quest
Everything
Splinter
Story, Programming and various voices
One spy too many...
Everything
Hyde and Seek
Game Idea and developer
A Place In The Sun
Testing
Sonic and friends in: Club House
Everything
Gone Boat Fishin'
Everything
Sprouts of Evil
Everything
Quest for Ekoban
Story, creator, scripter
Jumpin'Jack: the bean powered kid
Everything
The Man From Fugue State
Alpha testing
Gone fishin'
Creator, graphics and scripting
GHOSTCATCHERS
Author, graphics and scripting
When the worlds calls...
Creator, writer and producer
Generation Fun
Everything
Let's Cook: with Koala
Story and scripting
MONSTER WANTS IN
Tester
Beyond Horizon
Story, graphics and scripting
Tomb Hunter: Ramitupem
Creator, Story, Graphics and Scripting.
DarkForce: Peace among nations...
Story, scripting and graphics.
Feng Shui And The Art Of TV Reception
Testing and feedback
The Hobbit: Rise of the Dragon King
Story, Creator, Scripter, Dialogs, Graphics, Animations.
Beyond Eternity episode 1
testing
The Condemned
Creator, Scripter, Backgrounds and Sprites, sfx.
JACK
Creator, story, graphics and scripting.
Speed Buggy: Manifold Destiny
Playtesting
Deadly Consequences!
Creator, sprites, scripting, male voices
DSM: Are we alone?
Creator, Writer, Graphics, Scripting.
Mysteries of Peak Valley: Case 2 The White Lady
Voice acting, testing
House of de Sade
Creator, Writer, Graphics, Scripting.
ELF: The 4 Elements
Creator, Writer, Graphics, Scripting.
ELF: And soon the darkness...
Creator, Writer, Graphics, Scripting.