Terror of the Vampire!
(6 downloads)

I Rented a Boat
(4 downloads) 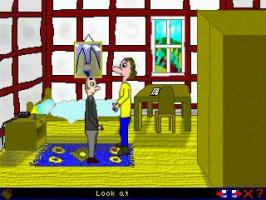 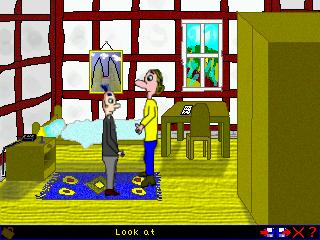 "Missing since Midnight" is an entry for the February 2005 MAGS with the topic "Hotel". MSM takes part in a more than 400 years old half-timbered house that the owner has made into a hotel. You are playing Tim Buktu, a private detective who just wanted to go for a holiday. But then someone is missing and you are asked to help searching for the missing person.

Features: * eight characters, three of them are female * eight rooms, including guest room, kitchen, reception, dining-room and parking lot * 50 different animation phases * more than 6000 words (40 kb of texts) Since the game is very text-laden, so it will take about one to two hours to finish the game when not cancelling the dialogs. I don't know how long I've been working on this game but it must have been more than 40 hours. I started the game on February 6th and finished it just two minutes before midnight (CET) on February 25th. UPDATE (March 2nd) V 1.05: * some typos and other text mistakes corrected * some new animation phases: Tim can tip over the bucket now, and Freds eats and looks at Mel and Tim during supper * sentences for unhandled events like talking to an object/hotspot added * German translation added * some minor bugs corrected, now Tim can't go outside on Day 1 and the starting of the scene with the talking radio set has been changed, so that it can't be cancelled mistakenly that easy * during all cut-scenes that can be cancelled by ESC or a right mouse click the status bar is switched off * the Intro sequence has been a bit refurbished WARNING: Because of the new animation phases older savegames won't work with the new version. For the future I've planned to maybe make a voice pack (depending on how much time I've got). ---------------------------------- CREDITS: STORY, DIALOGS, GRAPHICS, SCRIPTING: Arne Voigtmann SOUND EFFECTS: www.flashkit.com BETA TESTING: Maximilian Baumgart MUSIC: Â»TURRICANÂ« Soundtrack by Chris HÃ¼lsbeck BACH & SCHUMANN played by Enore Zaffiri www.leonet.it/art/zaffiri/ (C) 2005 by Arne Voigtmann Created with using Â»Adventure Game StudioÂ« by Chris Jones www.adventuregamestudio.co.uk
See the people who made this game and any other games they've worked on >>
Maxileen
Everything

Nice music & Atmosphere.
Story seemed to have real potential when it started. The title suggested that too. But the ending & outcome was disappointing. The alien thingy was rather childish.
2005-03-01 21:35:39 by jj
You must be logged in to the forums to post comments.
© Adventure Game Studio 2021. Page design by loominous and Darth Mandarb; coding by AGA.
Page generated on 18 Apr 2021 at 05:57:30