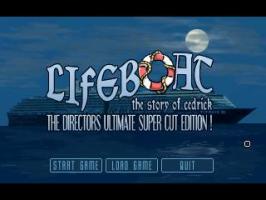 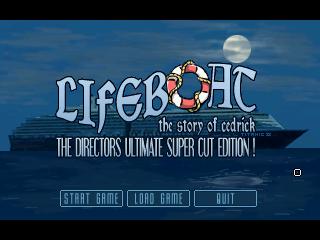 What actually happened to the dread pirate, Black Peter? In this day of modern sea-faring, pirates are a rarity, hunted to extinction by the fierce... guys who don't like them or something or other. Black Peter, the most dreaded pirate in all of the seven and a half seas, went on his way, taking a vacation from his scurvy-lubbin' piratin' ways, aboard the cruise-liner HMS Titanic II during its maiden voyage. But the ship was lost with all hands.

What happens next? Are the rumours true about his untimely demise? Or did he survive? Is the story of Cedrick what really happened, or is it all, a lie?!
See the people who made this game and any other games they've worked on >>
LordHart
Scripting, Graphics, Story and Testing
4 other games: >>
No, I Am Spartacus!
Programming, Graphics, Testing, Sound
Pennis: The Ultimate in Pong!
Programming, Artwork and Testing
Lifeboat: Story of Cedrick
Scripting, Graphics, Story and Testing
Brad Bradson I: Key Quest
Programming and Graphics
BOYD1981
Music
6 other games: >>
Limey Lizard: Waste Wizard!
Voice and Lead Tester
I Need A Wee!
everything but music
Pennis: The Ultimate in Pong!
Music
Lifeboat: Story of Cedrick
Music
Boyd's Music Mixer
Spot the Difference
ravenfusion
Testing
Haddas
Testing
2 other games: >>
Lif and the Treasure of the Tanones
Voices
Princess Marian VIII: Snowfight
music
Obi
Testing
5 other games: >>
Ryan's Day Out
Creator of everything
I Need A Wee!
inspired by
Are We There Yet? 2
idea
Are we there yet?
I made the game yes
Pennis: The Ultimate in Pong!
Sound Effects

I've had fun playing this game, even though many of the jokes are way gross.
Still it's a nice production, with good music and solid puzzles.
2009-12-05 12:05:20 by bicilotti
Despite the naysayers, this is one of the more fun games I have played here.... great humor!
2007-10-29 06:01:04 by uvaagsfan
What is there to say? The plot was thin and although the punch line could have been good, the timing was bad. Why the bad language? It was inappropriate and entirely unnecessary.