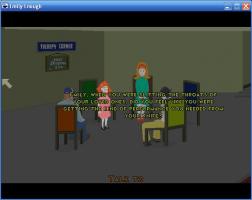 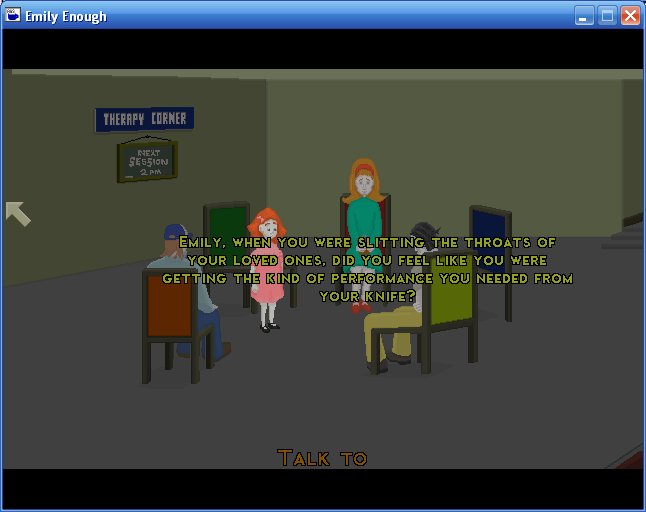 My only complaint is about the puzzles. While they are good in theory and actually not to hard, sometimes it's quite complicated to get there (like you have to talk to someone again right after you had a talk with them).

2009-02-09 18:21:24 by foxyfox555 (foxyfox666)
Charming characters and humor, a bit light puzzle and story wise.
2009-01-11 13:04:28 by bucilotti (bicilotti)
The game goes along the sharp edge between farce and sickness, and that what I found most amazing.
Also, it perhaps the only one I met so far, where EACH character has its unique-ness and peculiar charisma. I actually loved the lawyer in the bathroom :) I found it somehow serene to keep standing there listening reverberant keyboard clacking :)
2009-01-08 15:52:40 by Crimson Wizard
For adults only. I would even say for 30yo+

Promotes strongly deviant behaviours, both for adults and children. I finished the game because i thought the goal of the game was to condemn them, and/or show how they are awfull, but was not.

Sould be on a page for adults only, or even just removed.

Great sense of humour, I will never look at Ed Gein quite the same way... Nor meetings to discuss the overall enjoyment of a knife while killing... Outstanding! I hope there's a sequel soon... Please...?

Id love to see a sequel too!
People who havent played this yet: Great graphics, awesome evil main character...just play it or youll miss out.

2007-08-06 00:06:45 by Peach
There are 10 more comments that you can see >>>
Please, PLEASE make a sequel. This game is awesome.
2007-04-16 01:53:07 by Scienceman123 (Neutrino)
I just finished the game. I LOVED the script! LOVED IT! It's the best I have seen so far! The things Emily says throughout the game were awesome! Great sense of humour, great story and plot, nice graphics. The only part I didn't like was the music. But apart from that I really enjoyed this game very much. I hope Emily kills Percy or the heir of her family fortune or something, because I really want to play an other episode! Great work!
2007-04-04 19:35:45 by Ariadne
the end sequence/puzzle was a bit rushed and silly, but overall this is a damn good game. and the title track was awesome - that alone was worth the download.

please bring back Emily in a new game!

I really enjoyed the general feeling. Graphics are outstanding. Maybe I expected a little more about different characters, but it didn't bug me much after all. Story is everything but ordinary and the puzzles seemed to suit the game very well. Congrats!

I agree with the others; more please! (no pressure :P )

2006-05-24 03:31:52 by ophilius
I have just finished playing this game. Overall I would rate this very highly. A few difficult sequences but nothing too crazy making. Only complaint would be the length. More please!
2005-11-08 16:43:33 by angua
This was a really nice game-- nice graphics, interesting characters, and logical storyline. The biggest problem with this game is that it wasnt longer ^_^
2005-09-04 18:00:28 by gummicommander
Emily Enough is a sometimes deliciously off colour adventure. Set in an asylum, you play the role of spoiled brat murderer Emily, hell bent on escape.

The main attractions of Emily Enough are the graphics and the music. The pale, eerie characters stare blankly a the walls of the superbly sterile asylum and the cold, detached music really lends the game a stomach churningly creepiness.

The script is good but flawed. Insistantly sick, it dwells on the dark side of the human soul, making room for some great satire on big business. Some of the characters seem a little redundant and occasionally the desire to be gruesome overwhelms the comic potential. I adore black comedy but it can be hard to pull off. The therapy session stands out from the script (Ed and his obsession with killing whores made me laugh most).

With a decent game length and some pretty difficult puzzles, you should be playing Emily Enough for a while. It's a good first effort which conquers its flaws and emerges as a solid if slightly uneven gaming experience.