Larry Lotter and the Test of Time 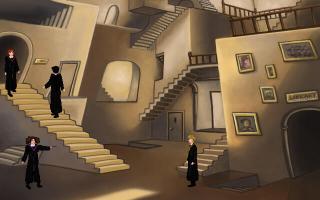 If you've played this game, why not help out and give us your votes?
18 people have rated this game so far:
Visual:
84%
Immersion:
78%
Puzzles & Pacing:
71%
Overall Enjoyment:
71%
This game features voice acting.

It's time for the final exams at Magic University, and notorious slacker Larry Lotter is about to flunk all of them because he spent less time studying and more time drinking beer. But there is yet hope! Using a spell to travel back in time, he gets the chance to do his day over again and pull some tricks to pass the exams anyway! And he has to, because it's his Destiny.

2009-02-03 16:23:57 by Anonymous (azerty)
skip it
2008-01-14 21:17:58 by pandabearlove
I enjoyed this one, though I had to use the hints on the Crystal Shard website to finish it. Some frustrating moments due to timing - I don't usually like racing against the clock, but in this case there was enough going for the game to make me refuse to give up! Great visuals and background details, nice touches like the other characters' conversations (is "Darco" bribing the teachers for good exam results?!) I found it hard to track down some of the spells and to be honest I would have been stumped by certain puzzles if it hadn't been for the walkthrough. I'm not particularly into Harry Potter, so I'd say this isn't one just for fans - I'm sure you get more out of the jokes if you love the books, but it's not crucial to completing the game.
2007-11-20 17:51:16 by TheDreadfulPeff
A game with a very original approach. It might seem ridiculous at first, but it ends up making a lot of sense, once you wrap your brain around its modus operandi.
2007-08-19 10:33:59 by jkohen
Tricky and funny game... not for anyone... I really had to put my brains in to it to finish it, Good parody, I WANT MORE....

PS. Maybe a little buggy but it is excused for having such an original premise (I mean the time traveling)

2007-05-21 23:23:55 by alexhans
I'm sorry, but this game was just awful.... there seemed to be absolutely no point; I couldn't even figure out how to start/initiate any of my finals (example: potions, at the beginning). furthermore, it was sarcastic and rude, but not in a way that was whitty or even remotely amusing. It was just....annoying and unpleasent....like listening to some stranger who comes up to you and starts ranting about something they can't stand and you try to listen but eventually you feel like your ears are going to explode....
I fully support your right as a free-thinker to parody whatever you like (as long as you give a disclaimer, etc etc) or to not parody if you so choose. But if you do feel the urge to create a game parody, please, at least make it enjoyable and put a little thought into it...
2007-05-08 20:59:46 by Anonymous (MissCrystalix)
Great little game! I love how the characters wander round doing their own thing and talk to each other.
2006-12-28 16:28:29 by Pelican
Brilliant and origianal game! Very, very addictive. I'm crossing my fingers for a larger version of this.
2006-12-21 01:24:45 by tripplea (Tripplea)
The bug a1s mentions below has been fixed. Please don't log bugs here, use the forum thread or send me a PM. Thank you.
2006-12-10 23:03:51 by Radiant
There are 5 more comments that you can see >>>
so, you meant NEXT monday then?
2006-12-07 16:45:11 by Porry Gutter (a1s)
this game keeps crahing before the first exam! says that "Script appears to be hung <...> in Charecter script (line 323)"
seeing how everyone else is happy with this game, I assume they manged to vercome this problem. please share as to how.
thank you in advance.