The techniques described in this article still work but are overly complicated.
Starting from AGS 3.4 P4, it's much easier to manipulate fonts and make a 256-characters game.

Read this instead of the current page : Fonts.

All the knowledge below is preserved for legacy reasons.

Preliminary remark: for demonstration purposes, this page makes use of special characters. This wiki page is supposed to be encoded in Unicode (UTF-8), therefore, you should see all the special characters correctly.

This page is meant to provide in-depth explanations about how AGS manages fonts, and how to create fonts for AGS.

If you only want to read the short version, read this.

The MOST IMPORTANT part: define your needs

Mostly, you need to answer these two questions :

a. In English only?
b. In some language that uses a handful of special characters (for example: accented Latin letters, as in German, French, Spanish, Polish...)
c. In some language that uses slightly more special characters (for example: Cyrillic alphabet -- Russian, Bulgarian, etc.)
d. In an alphabet with much more letters? (Japanese, Chinese...)

Read further to know how to create fonts.

Of course, there are the fonts shipped with AGS or with any of the additional templates. But if you're not satisfied with those, then you now need to lurk on the AGS forums, looking for one of those 3 items:

- Either an archaic SCI font (see the "more about the formats" section of this document) that would still be around in year 201x, and would fit perfectly into your game (you like old things, don't you?) ,
- or an existing WFN font (AGS' internal font format) also floating around somewhere on the forums, or that you'll make yourself,
- or an actual TTF font, but designed to look like pixel-art (for example this one). Be careful, that's very tricky. You must read further below.

Read further to know where to find fonts of each type.

More about the formats

Just an overview of the terms we're going to use.

Historically, this format is inherited from Sierra's video games, but it doesn't matter here. What does matter is that the SCI format is a very, very old format. It's kept only for legacy reasons, mostly because it used to be a convenient format to manipulate pixel-based fonts (as opposed to vector-based fonts, such as TTF).

The main issue is that it's tricky to extend it to 256 characters (read further to know why).

Q: Does it support 256 characters?
A: No, with a twist. There is "variant" SCI file format that was introduced around 2013 with more recent versions of AGS, and with more recent font-editing tools. This variant SCI format supports 256 characters, and is incompatible with the official SCI format, but who cares? See the "how can I make fonts" section.

Historically, WFN used to be an actual font file format from an MS-DOS third-party tool in the mid-90's. But it's not relevant at all anymore. You may instead consider it the official AGS font format.

More specifically, you could see WFN fonts as SCI fonts turned "AGS-ready". Most of them are probably SCI fonts that were imported into AGS at least once.

Q: Does it support 256 characters?
A: No, with a twist. There is "variant" WFN file format that was introduced around 2013 with experimental versions of AGS, and with more recent font-editing tools. This variant WFN format supports 256 characters. In 2013, it was only supported by experimental versions of AGS. I'm alsmost sure it's fully supported in 2015. See the "how can I make fonts" section.

TTF is the official Microsoft Windows font file format. It is vector-based, which means it's better at handling normal-sized curved fonts than tiny, pixelly fonts like the ones you usually see in old-school point-n-click games.

Q: Does it support 256 characters?
A: Normally yes, but be careful. TTF fonts rely on the Unicode standard (see the "understanding character encoding" section), which means they can virtually represent any character in the entire universe. BUT it depends if the graphic designer who created the font went into the trouble of drawing the characters that you're interested in. Chances are, if you download an English TTF font, open a text editor (for example MS Word), and type any character outside of the 127 standard characters, your text editor will rollback to Times New Roman for those characters. Because Times New Roman has them. And your cheap font doesn't.

At least try to find a TTF font that has the 256 characters from the Latin-1 characters set (see "understanding character encoding").

By "bitmap", we mean any sprites table that you will later use to create a font. It's not a font format in itself and needs work. Read more about that further below.

Where can I find fonts?

We suppose that you want to use fonts that already exist.

A good place to start is on the AGS website "resources" page.

If you search the AGS forums properly, you will find resources of WFN fonts collections. Don't forget that WFN fonts are virtually the same thing as SCI fonts, so you can switch from one format tot he other with the correct tool (see section "how can I make fonts?")

There are plenty of sites providing free fonts. The only catch is that you should make sure that the fonts are free to use (Respect the work of other people! Always check the fonts' licence!)

TTF fonts that look like pixel fonts AND have accentuated characters: here

Some Cyrillic TTF fonts, some of them that look like pixel fonts: here

How to import fonts into AGS?

AGS expects to find SCI files with the following naming convention : FONT.0, FONT.1, etc. Therefore, if you want to import fonts made with Radiant's Font Editor (see corresponding section), you need to rename the file you created:

Note: if you import a "fake" SCI font (256 characters instead of 128, see section "more about the formats"), then the import might fail with an error. Or it could work, but obviously AGS will use only the first 128 characters, and you will lose the benefit of the extended font.

WFN is AGS' internal font format. The only (very) weird thing is that (as of 2013, AGS 3.2.x) there is a bug preventing AGS from importing its own format! The only way to import a WFN font is :

Note: if you import a "fake" WFN font (256 characters instead of 128, see section "more about the formats"), then the import should work, but obviously AGS will use only the first 128 characters, and you will lose the benefit of the extended font.

How can I make fonts?

How to create a 128-characters font from scratch? 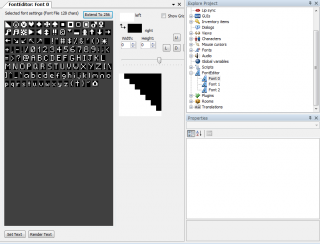 That tool comes in two flavours: either as standalone, or as an AGS-Editor plugin. Either way, it works the same way.

Get the tool here.

The advantage over Radiant's editor is that it allows 256-characters fonts. That's not immediately obvious, so the easiest way to start is to open an existing 256-characters font and work with it. (reminder: this "fake" 256-characters SCI/WFN format is not the standard AGS format. Handle with care.) EDIT: in the latest version, Rulaman made the switch between 128 and 256 characters more natural.

If can be found in this forum thread with some explanations or on a quick mirror.

That's the most handy convertor to date, between the 3 formats : TTF, WFN and SCI.

It can be found here.

It can be found here. That tools was not designed for AGS but it might be a nice alternative to manipulate sprites tables generated from TTF fonts. You must consider it an additional tool to Calin Leafshade's SpriteFont renderer.

That's outside of the scope of this document. Creating "real" fonts is a rather difficult task. But in case you really want to create your own font Font Forge is a good tool to start with.

Before you go further, you need to read this : "The Absolute Minimum Every Software Developer Absolutely, Positively Must Know About Unicode and Character Sets (No Excuses!)" This way you'll know what ASCII, ANSI, "Latin" ISO-8859-1, Unicode and UTF-8 mean. Seriously though, don't dive too deeply into the Unicode part, there's much more than you need to know for AGS.

Use a GOOD text editor

Do yourself a favour. Never EVER use Notepad to open a text file. Instead, use an editor that won't silently mess with the current encoding when you save.

How does it apply to AGS?

You must make the difference between :

For example, it means that symbol "153" is the trademark symbol (™). Go on, you try and type it (or copy and paste it) into AGS. If your Windows is using Windows-1252, you'll see it appear correctly. Otherwise you might see something else being rendered in place of it.

Why is it interesting? Because the Windows-1252 has the exact same mapping as iso-8859-1 (a.k.a "Latin-1"), except for characters 128 to 159. I chose the TM symbol on purpose because it's within that range, to show you that sometimes that slight difference can cause an issue. But in 99.9% cases, you won't care, because all the important characters (especially the funny French/Spanish/German characters) will be the same in Windows-1252 (in your script editor) as in iso-8859-1 (in your external text editor or in your browser).

Let's take a concrete situation: You're programming your game in French, and you want an in-game dialog to contain character "é". That means you either typed "é" into the dialogs editor, or into the script editor (e.g. "player.Say("ééééé");). Now, your proofreader has sent you a corrected version of the dialog by email. Well, because Windows-1252 is the same as iso-8859-1, that means you can copy and paste that email into the AGS editor. More generally you can copy and paste any text generated externally to AGS (with any good text editor or browser) as long as it was displayed using iso-8859-1. In the same fashion, if you export translation files outside of AGS, they will be encoded in ANSI, and if you watch them with code page iso-8859-1, then every character will appear correctly. Immediate characters matching = less mistakes!

Note: Don't forget either that some experimental versions of AGS can use 256-characters WFN or SCI fonts. Read further to learn more about that.

Note: Don't forget that some experimental versions of AGS can use 256-characters WFN or SCI fonts. Read further to learn more about that.

AND FINALLY, CHOOSE YOUR DESTINY (how to have 256 characters in your game)

With the release of AGS 3.4 and Rulaman's TtfWfnSci tool, the most reliable (and convenient) solution for bitmap fonts will become more and more the mad scientist strategy. The best solution for hi-res games using out-of-the-box TTF fonts remains the Lucky Guy's strategy. If you don't care about non-English gamers, or if you care about them but are already used to the old, counter-intuitive way of doing things, then use the Hacker's strategy. If you want bitmap fonts but don't like AGS Draconian or can't wait for AGS 3.4, then stick to the brute force strategy.

A. The hacker's strategy

People used to do this :

B. The lucky guy's strategy

This solution makes you use a regular version of AGS, along with TTF fonts used "as-is" (not converted to bitmap).

1. Find one (or several similar-looking) TTF font(s) that has(have) all the special characters you need. As said before, many of them even mimic the pixel-art style. (see section "how can I find fonts?"

2. Import the font into your game. Special characters should be rendered correctly.

This solution makes you use a regular AGS, but with a plugin.