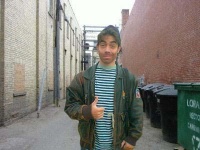 Alliance, standing in his local habitat.

Alliance (a.k.a Sean Tilley) is a rather crazy fellow. He lurks around the AGS boards, and is quick with a pun, and sometimes even some actually helpful advice.

The avatar of Alliance.

In 2006, he founded Squadron Six Entertainment, a small adventure game team of about 6 people, and has been working on remaking Space Quest III: The Pirates of Pestulon.

Not much has been said about the projects that go on at Squadron Six, but the few that have been revealed by Alliance are:

Space Quest III: The Pirates of Pestulon REMAKE: A VGA remake of a Sierra classic.

Dumb Quest: A goofy parody of the King's Quest series. No word on whether they'll ever be finished.