The House of Mr Chocolate 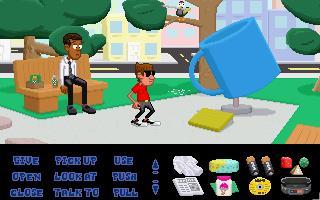 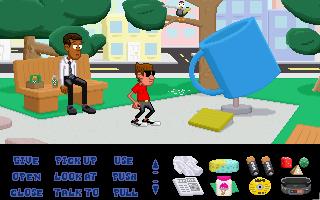 Help Jackson get his game on!

... c'mon!
See the people who made this game and any other games they've worked on >>
cerebrit
Creator

Excellent visuals, funny and excellent story, but too many bugs sadly.. Most puzzles are quite easy, but some of them are a bit ackward but made sense after you know what needed to be done (I had to use a walkthrough before I even knew about this)..
But I would certainly play any sequel or other game created by the author..
2007-07-09 23:24:50 by SuperDre
Great game, I loved the humor, the puzzles were really well done, and I liked the art.
2007-02-23 15:38:04 by mr.me
Too bad the game is unfinished! What would otherwise be a wonderful experience dilutes as most interactions are missing. Also, the game is still full of bugs.
2006-07-24 01:22:29 by Vic Freeman (VicFreeman)
This game was incredible. Not your typical adventure game, but interesting. The whole story about a boy who want's to play a D&D type game is funny and how he has to rescue his friends.
2006-03-20 16:34:40 by Blizzaga Dragon
The graphics were awesome, the puzzles were challenging and the cut-scenes were hilarious!!!

I really had fun playing it =)

2006-02-18 15:44:15 by CosmoQueen
Congratulations first of all on having me fall in love with your game and its graphics; the atmosphere is simply superb as you kept the same feel as in DoTT (one of my fav games played when I was younger, ahh the nostalgia!). And secondly, you added just the right ammount of humour and the puzzles weren't too hard or too easy. It was... perfect! I applaud your genious!
2005-04-09 17:38:03 by Coffee Lady
This bears a striking resembelence to some of the LucasArts games, DOTT in particular.
It's all extremly well drawn, and the puzzles are all mostly logical.