Difference between revisions of "5 Days a Stranger" 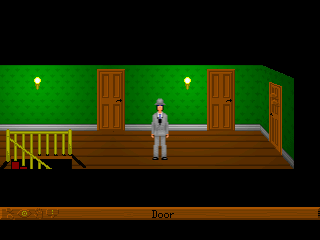 A screenshot of 5 Days a Stranger.

5 Days a Stranger is a freeware amateur adventure game created by Ben "Yahtzee" Croshaw.. It chronicles the story of a gentleman thief known as Trilby and four others fighting an unknown terror in DeFoe Manor. The story progresses over 5 days, with more story being revealed each day. Dream sequences typically space out the transitions between the events of different days, and the game follows a system similar to that of the Gabriel Knight adventure game series, with a large number of verbs possible for interacting with objects, and a certain number of events which must be completed at a given point to progress to the next phase of the game.

7 Days a Skeptic is the sequel to 5 Days a Stranger, and Trilby's Notes is an interquel between the two, although they work equally well played in their order of release, 5 Days, 7 Days, then Trilby's notes.