Charlie Foxtrot and the Galaxy of Tomorrow 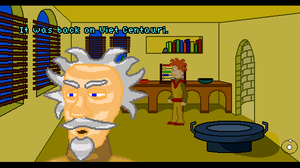 Charlie Foxtrot and the Galaxy of Tomorrow is a full-length sci-fi parody adventure game. It was made with AGS version 2.72 and released in July 2007 by BaRoN. It has been well received by a cult-following, but its nerdy humour has not found a wider audience.

The game begins on the Mother Station, where the introductory cut scene introduces the Clone Lord and a segment of his clone army. One of the clones (Charlie) flips out, revealing that he can no longer conform to the clone ideal of mindless similitude. A patrol droid pursues Charlie through the base, but he ducks into a washroom and temporarily escapes. As he explores the back passages of the station, Charlie encounters Quatra, the leader of the Rebellion Against Conformity. Charlie sympathizes with the cause and decides to join the rebellion. He is sent on a zany quest through the galaxy to try to link up with the rebellion.
Charlie travels between planets in a stolen space ship called the Millenium Bug. His first destination is Aridis, a desert planet. Here he meets a crazy war veteran, an irritable junk monger, a crippled beggar and a host of other alien creatures. After partying at the local canteen he must dodge Sand Sharks out in the dunes to discover the rebel base.
Clues lead Charlie to the next planet, Marf, which is a post-appocalyptic puppet world. After an encounter with an Elvis impersonator, a ninja gremlin and a giant monkey (among many others), Charlie links up with the Friggles, rebel sympathizers who send him on to another planet.
The last planet in the quest is Primordia. It is a pre-historic preserve, where unevolved apes and dinosaurs roam. Charlie must find a secret base, infiltrate it, and steal The Source, the original genetic material from which the clone army was made.
Charlie returns to the Mother Station. With The Source in his hands, Charlie cannot be vaporized by the Clone Lord and can face him. This final battle, fought in front of an army of impressionable clones, proves once and for all whether conformity or originality is the supreme force in the galaxy.

Charlie Foxtrot and the Galaxy of Tomorrow parodies dozens of science-fiction and popular culture elements from the 1970s to the 1990s. Specific examples are: