This article is about a powerful ring used to control the AGS community. For information on the one ring to rule them all, see Engagement Ring. 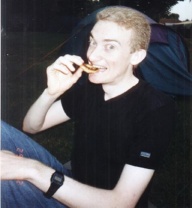 The Onion Ring is the food of the gods.

It was created by the Dark Lord during the Second Age in order to enlarge his own might by combining it with the power of the Elven Smiths, and thus to give him control over the other Rings of Power. The Onion Ring was forged secretly in the fires of Laleham. His will was then inside a ring that could control the other rings. Thus, he was more powerful than ever before when he wore the Ring, but became much weaker when he lost it.

Though it appeared to be made of simple onion, The Ring was virtually impervious to damage, and could only be eaten by a god. Unlike the lesser rings, it bore no gem, but its identity could be determined by a simple (though little-known) test: when heated in a fire, it displayed in fiery Tengwar letters in the Black Speech of Staines a section of poetry from part of its lore - the Ring inscription:

Something happened that the Ring did not intend. It was eaten by the most unlikely creature imaginable: An Englishman, Chris Jones. He put The Ring in his mouth almost without thinking; certainly it did not seem of any use at that moment. It was in this moment, when all hope had faded, that the Dark Lord was finally defeated.

It was then predicted that the time would soon come when AGS shaped the fortunes of all.