AGS script modules are a way for AGS script code to be reused and shared. They work like plugins, through a module manager, but are written in AGS script code entirely, and thus are independent of the platform on which a game is run. 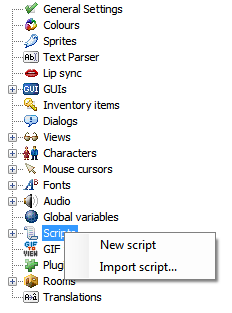 The module manager is accessed through the Script menu on AGS, where a number of options are presented:

New script
create a new module from scratch
Import script...
load a module from a .SCM file that you have downloaded

From the specific script file within the opened script node you access the following options:

Rename
Give the module another name
Delete
Removes an existing module from the game
Move up
The order of modules can be important, as it reflects the order in which they are compiled and run, so this option and the next let you change their ordering.
Move down
see Move up

Export
save your own module as a file others can use (modules are also saved in with the game they are used, so you don't HAVE to export them unless you want others to use them)

You can also enter a brief description of the module, a version number and authorship details in the module manager when you create a module. There are options, too, to protect the script and the module info from modification if you export and distribute your own module.