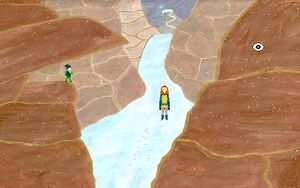 The Winter Rose is a medium length fantasy adventure game. It was made using AGS version 2.6 and was released in November 2005 by Baron. It was praised for its witty writing and moody atmosphere, but its lack of a final cut-scene left many players disappointed.

Rose is a young archer girl whose forest homeland has been beset by an evil ice-dragon. The ice-dragon's breath keeps the land locked in perpetual winter, and Rose's father has become gravely ill. Setting forth with her bow, Rose vows to vanquish the ice-dragon in order to save her ailing father. Along her way she must wander through snowy ruins, past frozen villagers and knights-errant, in a surreal and hauntingly empty landscape. She matches wits with sasquatches, evil gnomes and a mentally unstable witch on her quest, and eventually faces the dragon down in an epic showdown of wit versus raw power.