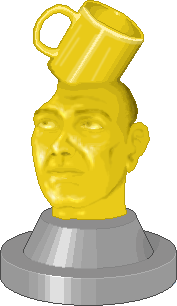 The FOREGOs are the AGS Community's Annual Awards for contributions to the forums and community (as opposed to the AGS Awards which are for game-making). The name is based on the ERGOs, which were a previous set of humourous awards made, and a play on "Forum and ERGO" but also a play on "For egos".

The FOREGOs were started by SSH, for achievements in 2003. Nominees and winners.

The FOREGOs were administered by Dart and Al_Ninio for 2004, Winners.

This year's FOREGOs were once again run by SSH, with assistance from AGA and CJ. Results for 2005.

After some years of non-FOREGOS the awards are back again. Hosted by Dualnames, they might perhaps restore some of their prestige.