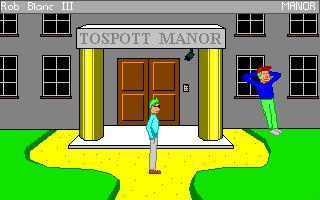 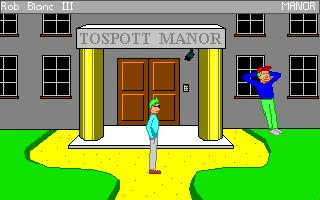 Something sinister is going on in the universe. Strange sightings have been reported; it seems that clones of ships, people and even planets have been appearing; clones that apparently echo both the future and the past. The governments of the universe have all drawn a blank - so they pass the buck onto Rob Blanc. Control both him and his sidekick Paul as you get to the bottom of the problem, visit four different interstellar locations and travel to a parallel universe...
See the people who made this game and any other games they've worked on >>
Yahtzee
Creator
Mods
Theme tune

"Early Yahtzee that's showing it's age. Fun, but very rough around the edges. Game uses dos-based engine. Compatibility issues may arise on newer systems. Recommend use of VDMSound, available from http://sourceforge.net/projects/vdmsound/, or similar."

Technically, this may just be the best in the Rob Blanc trilogy. The graphics are pretty decent and the music is slightly more appropriate than in the previous two games - although it's still the weakest part of the series.

The greatest disappointment is in how the creator decided to abuse the "time" feature to justify rushing the final act. Even the descriptions and dialogue sound rushed, as if the creator just wanted to get it over with.

It's still a decent game, considering it's free, but I wouldn't play it more than once.