Night of the Hermit 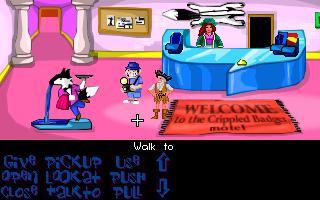 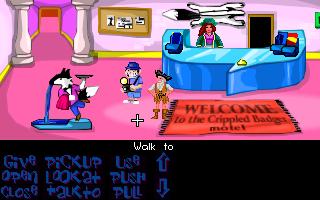 If you've played this game, why not help out and give us your votes?
43 people have rated this game so far:
Visual:
69%
Immersion:
62%
Puzzles & Pacing:
67%
Overall Enjoyment:
68%
This game features voice acting.

A spin-off of a very well-known pirate game, NoH is about a hermit who receives a message in a bottle, announcing his inheritance of his deceased grandpa's mansion. Upon arrival, however, he discovers the mansion has already been claimed and remodeled as "The Crippled Badger Motel." Now, it is Herman's quest to claim back his family's mansion and prove himself as the man he is.

The download is split into two files, the game itself (as the download link) and an optional talkie version (as the mirror link), so click on both if you've got the bandwidth. in any case the talkie version does not replace the game download.

Note that the games are compressed using ACE, so you'll need WinAce to extract them.
See the people who made this game and any other games they've worked on >>
Roy Lazarovich
Creator

i got it running by copying over winsetup.exe from:
'Reality-on-the-Norm: Dead Man's Political Party'

rename hermit.exe to DMP~1.P.exe and run the winsetup.exe.
u will see options to set sound and resolution.

though,i haven't got the sound,yet :)

2014-06-26 00:07:28 by donkeymilk
sometimes u can use another winsetup.exe from a different game ,but u have to rename the game.exe to same as where the winsetup.exe came from.

also there is a some files on this site that can help with running older ags games .

or try it in dosbox.

To be honest,i've been trying to run it and i get a distorted game screen ,so i haven't had any luck yet.
I tried using the ddraw(wine)dlls and also the dxwind.exe that another user said might help with older ags games.

2009-02-09 18:27:26 by foxxyfox555 (foxyfox666)
As I've said before and will say again. Excellent game.
2008-04-06 03:34:25 by gameguru
Great great game, Love the humor. Challenging and funny, just what i like to see in games. And the fact that Herman finally gets the rep he deserves is good too!
2008-04-06 03:32:05 by gameguru
This game has a severe problem. After a long time of figuring out puzzles I myself am not fond of, and trying to get to your goal, you get a very lousy ending which I won't spoil, because it doesn't have anything *to* spoil. If you could make Herman leave the hotel right at the beginning of the game, you'd feel the same way you feel when you finish the game. Better, in fact, because you wouldn't have wasted all that time.

Night Of The Hermit's ending is for me SO BAD it eclipses any redeeming qualities the game might have.

2007-09-01 10:44:08 by Rui Pires (redruM)
I haven't been able to play this game for over4 months. I have windows XP and I get an error message that I haven't been able to solve yet. I was told that I had to rename the adwin.exe to ac2game.dat but I still can't run the game. This is the message I get: Error "Could not load ac2game.dat. You must create and save your game first in room editor before you can use this engine" What and where is room editior?

This seems fixable through Setup, but this game doesn't seem to have setup...

With this error when I try to run it:
There was a problem initializing graphics mode 320x200
(Problem: 'Unable to find a suitable graphics driver')

The only irritating thing about this game is that the room transitions took a tremendously long time. But maybe others did not face this problem.
2004-02-20 02:22:41 by zooomer1990
Well, to be honest, I didn't like it. And I am diehard adventuregamer. Just Herman is too dull for me. He was as dull in MI series too. Just don't think a quiet and intelligent pops could make a good main character. And puzzles were a mess. But gfx is very good and I'm sure this one has and is going to have more fans.
2003-10-23 21:03:31 by InCreator
I think this could've been better. I'm quite put off because the puzzles are not obvious. I wish you'd added more reactions to the use of objects even if the move is wrong.
unhandled_event is there for a reason.
2003-10-22 04:02:55 by deltamatrix
This game is the perfect example of a job well done. If I was stranded on an island with only one AGS game I would want this one. What disturbs me though is the fact that it takes so long for the screens to transist.
2003-03-25 10:08:41 by the_nackster
This is one of the most impressive and well done games greatly showing the example of what you are capable of doing with AGS, and how far your imagination can go. It is truely a well done and thought out project. In my opinion, if AGS was a buy, this game would be the perfect way to advertise. Not only that, but to old diehard adventure game fans and veterans that played original lucas arts adventure (i.e. monkey island, day of the tentacle, sam & max, ect...) will have something to smile out with this fun clever game.
2003-02-14 21:03:41 by Raiden
Truly amazing. I loved this game and i cant say one bad thing about it, it is THE best fangame ever.
2003-02-09 07:00:26 by earwigz
I'm having problems getting the game to run. It says;

There was a problem initializing graphics mode 320x200
(Problem: 'Unable to find a suitable graphics driver')

I had a similar problem with 6DA but I fixed that by switching the resolution from 320x200 to 640x480 in the setup. This game doesn't seem to have setup...