The Sacred Tablets of Tibet
(3 downloads) 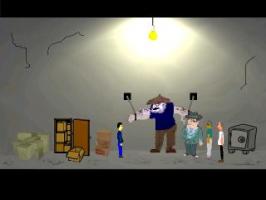 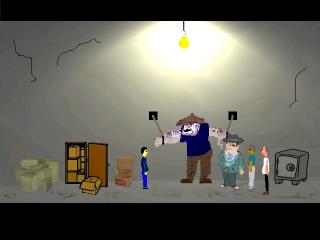 Download Options for Frank Stallone - The Driver and Mob Enforcer

UPDATE: NEW SERVER ...MAY 2011 Set in America during the 20's prohibition and the wall street crash you are Frank Stallone, a Taxi driver who by accident becomes involved with Al Capo, a bigtime Mobster. The poor get a small slice of crust action but the rich get the loaf. In your case it's definately the small crust! Anyhow, there you were, waiting to pick up a fare when suddenly this man jumps into your taxi screaming at you to make a quick gettaway. He is trying to escape the clutches of Bugsy Muldoon's mob who are chasing him with Tommy guns blasting! You have no choice but to try to escape them! * Drive cars, Booze lorry and a speed boat * Use Guns, Baseball bat, knuckle dusters, molotov cocktail...... * Meet Al Capo, Loose lips, 2 Fingers Tony, The Bull.....and Bugsy Muldoon!! * Find and steal a secret pizza recipe, but carefull you don't disturb Luigi's gigantic, mad dog!! * Blow a safe and steal con artist Lady Malinsky's Bengal Tiara * Shoot it out with booze hijackers * Try to get Johnny the Bull to talk!! * Find and rescue Diva Maria Bonus Shooting range at the end! Contains Music and Sound Version 1.0 March 13th 2010
See the people who made this game and any other games they've worked on >>
barefoot
Everything
10 other games: >>
TIGER HAWK SQUADRON 1
Everything
Sawn 1: Pain is just the start!
Everything
Sharky's 3: The Heist
Everything
The Hamresanden Chronicles II: The Black Prism
Everything
The Secret of Garbh Eileach
Everything
Boy in da hood: Give me the money!
Everything
Fur Balls 1 - evil be thy name: Bundles of mayhem!
Everything
Indy Bones: The Book Of The Gods
Everything.
Episode 2: Redpants meets Robinson Clauseau
Everything
Redpants: The Princess and the Beanstalk
Everything

"Ambitious in scope, with some good ideas, but execution fails on an number of levels. Controls are confusing, and inconsistent. Mismatched graphical styles can be distracting. A number of bugs, ranging from slight to serious, persist, though the author does seem to be addressing these. Plays much like a very early beta version, rather than a finished game. Hard to recommend in it's current state. Generally good (though somewhat derivative) writing is it's strongest asset."