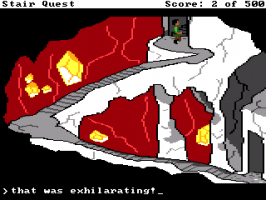 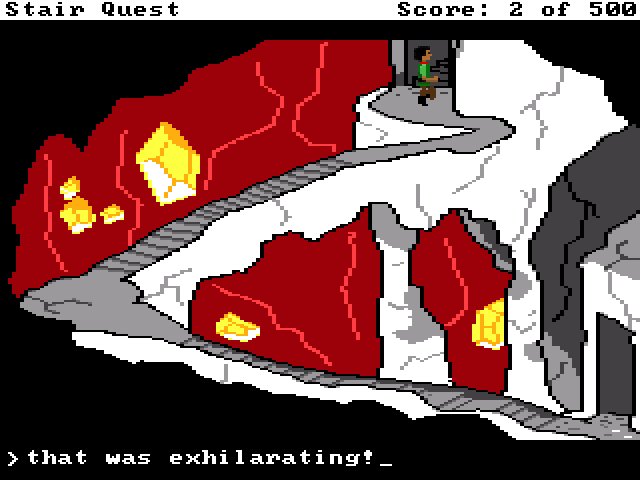 Stair Quest is a retro adventure game that pays homage to the most enchanting, pulse-pounding moments from the early King's Quest games.

The realm of Castle's Wood is in despair.

As famine, war, disease, and natural disaster wreck havoc upon the land, good King Jonathan seeks the council of a wise old Soothsayer.

"Seek ye out the Orb of Stars," she tells King Jonathan.

Says the King, "The Orb of Stars is but a legend!"

The Soothsayer replies with a sly grin, "Even in legend may one find the truth, m'lord."

So, King Jonathan dispatches his bravest knight, Sir Devon, to quest for the legendary Orb of Stars. Little does he know his own daughter, Princess Ingrid, has also set out in search of the legendary relic...

An innovative text parser that recognizes literally thousands of commands!

Multiple protagonists! Choose to play as either the brave Sir Devon or the daring Princess Ingrid.

An original 8-bit soundtrack so good it could pass as a 9-bit soundtrack! An old-school instruction manual filled with Stair Quest lore and important tips for success! So authentic, it could have been written by Roberta Williams herself. (It wasn't.)

I thought this was hilarious because it reminded of the good old Space Quest 2 where you had to walk around the silly tentacles lying on the floor and how frustrating it was just to get to the berries... XD

I thought it was a really great game even though I was hoping for more stairs and even more challenging levels!

But thanks for the good times!