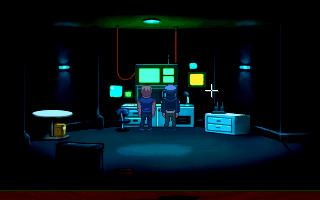 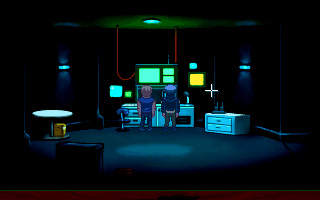 Escaping from a prison is never easy. But doing it with a correctional officer's consent is even harder. Officer Matthew Holmstett is a walking, talking regulation book and has his own set of ideals. Getting him to do what you want won't be an easy task. Don't overdo it, or you may find yourself handcuffed to a radiator very fast. Nobody trusts someone convicted for murder that easily after all... Recommended for mature audiences only. The mirror download is a version without the starter compiled with AGS 2.72.
See the people who made this game and any other games they've worked on >>
Bernie
Everything except music
3 other games: >>
Crash! Evade! Destroy!
Basic platform engine
Cedric and the Revolution
Everything except music
Deflus Technical Demo
Original verbcoin GUI scripting idea
Shane 'ProgZmax' Stevens
Dialog edits

"Very enjoyable, but would benefit from (1) an original soundtrack (2) the tightening of a few puzzles and (3) improved pacing. Only the multiple endings prevent Reactor 9 from being classed as a Short Game."

2009-02-09 18:49:07 by foxyfox555 (foxyfox666)
Honestly, without exaggeration, this is one of my favorite games that I've ever played, AGS or no. Even with its relatively short length, I was completely drawn into the story and I really cared about the characters by the end. I was actually sad when it was over. Best of all, I found the puzzles challenging but completely intuitive (yes, even the infamous "level measuring device" part). Others may not have had the same experience, but personally every solution made sense to me logically and I never had to just try randomly using items from the inventory until one bizarre combination worked. The "trust meter" was also a really unique and cool element, adding depth to the story. The graphics were fantastic too.

The effect this game had on me was so strong that I registered in the forums just to post this comment! I won't be able to get it out of my head for a long time. Bravo, Bernie.

now people are still playing this game and have many good votes. as you can see here
http://www.2dgames.eu/info.html?getid=121

Thanks for making this game :)
GCMartijn

This had it all, what I enjoy probably the most at the moment about AGS games: good gameplay, interesting story, intuitive interface, stylish graphics and moderate playing time.