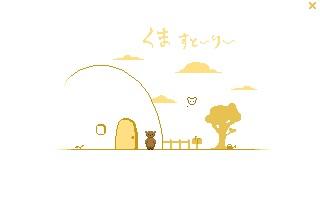 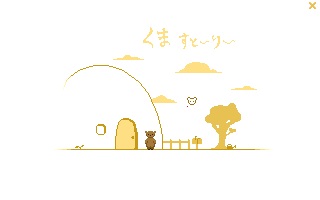 It’s Kuma Bear’s anniversary with his girlfriend, Cinnamon Bear. He is hoping to surprise her on their anniversary with a small present, but doesn’t have anything to give to her yet. Help Kuma Bear find something nice to give to Cinnamon Bear, and a way to surprise her with it. Kuma Story was originally created as an anniversary gift from SpacePirateCaine to his girlfriend for their 3-year anniversary. She enjoyed it very much, and asked that it be continued, and shared with the rest of the world. Please note that what little text there is in the game is generally in Japanese. There is nothing specifically important written at any point as Kuma Story is intended to be a short, mostly textless adventure game, playable and accessible by anybody in any language.
See the people who made this game and any other games they've worked on >>
SpacePirateCaine
Art, Story, Scripting, Music, Concept
6 other games: >>
Blue Lobe Inc.
voice acting
The Samaritan Paradox
Voice acting
Draculator II: Byte of the Draculator
voice acting
Kuma Story DEMO
Art, Scripting, Story, Concept
Red Flagg - Don't Call me Blue REDUX
Art, Programming, Additional Writing
Kinky Island DEMO
Saved Kinky Island
Shane 'ProgZmax' Stevens
Script Consulting and Beta Testing
6 other games: >>
Reality-On-The-Norm: The Affair of the Weirdo
beta testing
Hard Space: Conquest of the Gayliks!
Delectable Design, sprites, and BGs
Kuma Story DEMO
Script Consulting and Beta Testing
Red Flagg - Don't Call me Blue REDUX
Special Consultant
Limey Lizard: Waste Wizard!
Creator and Designer
The Shivah
Character portraits

"Although very short, Kuma Story shows a lot of style and warmth and will leave players with a smile on their face."

It's hard to rate this game because it's created for a different purpose from most games. It's lovely and will put you in a very romantic mood, reminding you that perhaps you should be doing something for your loved one!! Loved the bears kissing!
2010-10-02 00:24:04 by Anon (placebo_effect)
Really a cool game. It's really easy but nonetheless enjoyable. Really interesting art style great animations and music and its so cuuuute...
2010-09-30 23:27:42 by mode7
You must be logged in to the forums to post comments.
© Adventure Game Studio 2022. Page design by loominous and Darth Mandarb; coding by AGA.
Page generated on 22 Jan 2022 at 23:58:54