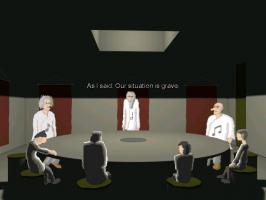 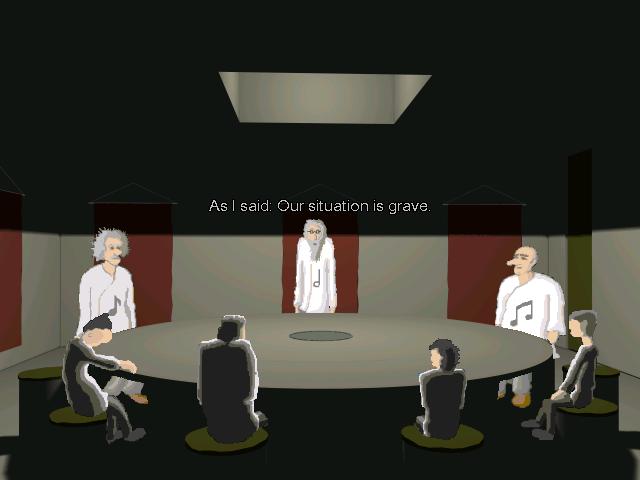 If you've played this game, why not help out and give us your votes?
45 people have rated this game so far:
Visual:
88%
Immersion:
84%
Puzzles & Pacing:
85%
Overall Enjoyment:
81%
This game features voice acting.

This game takes part in the future. Your task is to save the Universe from a lunatic professor. You'll do this by learning and using special abilities during the game.

IN THIS DISTANT PERIOD OF OUR FUTURE, MANKIND HAS DISCOVERED THAT THE STRUCTURE OF THE UNIVERSE IS BASED ON SOUND
IF PLAYED PROPERLY, THE SOUND PRODUCED BY AN INSTRUMENT CAN MOVE OBJECTS WITHOUT PHYSICAL FORCE, IT CAN ALLOW TRAVEL THROUGH TIME AND SPACE, AND IT CAN EVEN DESTROY WHOLE PLANETS.

FOR THOUSANDS OF YEARS THE UNIVERSAL GUILD OF MUSIC HAS PERFECTED THESE ABILITIES, WHICH DEPEND NOT ONLY ON THE INSTRUMENT BUT ALSO ON THE PLAYER.
THEY USED THEIR ABILITIES TO INFLUENCE THE UNIVERSE POSITIVELY. BUT THEY ALSO KEPT THEM IN SECRET IN ORDER TO AVOID ANY FORM OF ABUSE.

THE PUPILS OF THE GUILD MUST FACE DIFFICULT TESTS AND STUDY FOR YEARS BEFORE THEY BECOME MASTERS. THESE MEASURES ARE NECESSARY TO DISALLOW EVIL-MINDED PERSONS FROM GETTING ACCESS TO THE GUILD.
THIS HAS WORKED FLAWLESSLY FOR CENTURIES.

Otherwise from a kinda quirky movement and such it was fun. It has a very personal and unique flair.

It also had an interesting permise and it GREATLY reminded me of LOOM by Lucasarts if anybody remembers that game.

2006-03-29 02:29:18 by Ieremiou (sandrina)
Excelent intro and very good game, the only thing to mention is that the puzzles were just a bit too easy.
And the translation was perfect.
2005-11-04 17:46:41 by gabrielo
If you, like me, were turned off by the translation and never got to finish the game, please try it again. I rewrote most of the English text and Le Woltaire was kind enough to include it with the game, so now you can direct your hate to me if the new translation hurts your eyes :)

The updated version is already available for download. Le Woltaire was nice to work with, I'm sorry my first reaction was to post a negative review before even contacting him.

I understand that you were "turned off" by the spelling and grammar mistakes I made. I'm not english, so I have problems expressing myself in this language. If you want you can proof read my game.

It is interesting that you found bugs...nobody has told me about that, since now. What bugs exactly? Could you concretisise this? Why is the GUI unusable? It is almost the same as in many famous Lucasarts games of the past....

I think we have to help each other to improve our abilities. It would be kind to write a personal message and ask for hints if you get stuck or report a bug when you find one, before you post a bad negative comment or a bad vote....but thats only my opinion.