The Fan Game - The Secret of Monkey Island - RECODED -
(10 downloads) 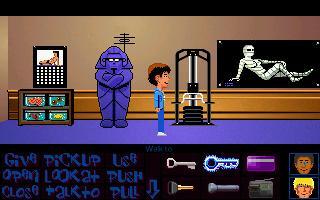 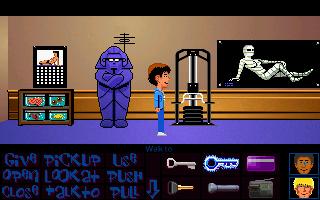 Ever since a meteor landed in the back yard of Dr. Fred and Nurse Ednaâ€™s Victorian mansion, bizarre things have been happening. First, their mutant son, Weird Ed, dropped out of school. Then patients started disappearing from Country Hospital. And now this strange event is affecting the lives of innocent (and even some not-so-innocent) teenagers. In fact, a girl named Sandy is being held captive in that musty old mansion right now. Sandyâ€™s boyfriend, Dave, has lots of friends who need you help to sneak in - and sneak her out. Now exactly how it all ends up depends entirely on which trio of friends you send in there. And which inhabitants you encounter. In fact, the farther you get inside the mansion, the more weird characters youâ€™ll meet. Thereâ€™s Nurse Edna - whoâ€™s as nasty as she is ugly. Thereâ€™s a disembodied Tentacle who wants you to make him a rock star. And a host of others, who all have their own crazy quirks youâ€™ll have to deal with. Everyone in there seems to be working for Dr. Fred. But the question is: “Who is Dr. Fred working for?” The game is available in English, French, Italian, German, Portuguese, Spanish, Latin American Spanish, Maltese, Bulgarian and Russian. Downloaded more than 100.000 times during its first week after release.
See the people who made this game and any other games they've worked on >>
LucasFan
Designer, Scripter & Artist
5 other games: >>
Maniac Mansion Mania 90: Packing the suitcase
Backgrounds & GUI
Bernard's Room
game pack
Maniac Mansion Mania Episode 2 - Commotion
backgrounds, sprites & GUI
Maniac Mansion Mania - Episode 1: Sibling love
Designer, Scripter & Artist
The New Adventures of Zak McKracken
Designer & Scripter
Proskrito
Scripter
2 other games: >>
Maniac Mansion Mania - Episode 1: Sibling love
Scripter
Underwater Adventures
fonts
a-v-o
Scripter
3 other games: >>
Craft Of Evil
Flashlight Plugin
Secret Quest Remake
Keyboard Control Script
Maniac Mansion Mania - Episode 1: Sibling love
Scripter
Trapezoid
Musician & Translator
8 other games: >>
Adventure: Welcome to the Genre
One music track
Pledge Quest II: Noodle Shop of Horrors
Music
Pledge Quest I: The SpaceVenture Adventure
Music
Pirate Fry 2: The Hand of Anturus
Music
Pirate Fry 3: The Isle of the Dead
Music
Underwater Adventures
music
Satan Quest
Creator
The New Adventures of Zak McKracken
Translator
MarvinS
Translator

Kudos, man - Can't wait to see what your next project is!

2004-05-26 04:28:38 by Rincewind
There are 4 more comments that you can see >>>
Awesome remake faithful to the original, the Lucas equivalent of Tierra\'s KQ1 remake.
2004-05-26 03:52:26 by Vel
I remember the original and this rendition brings it back to life and reminds me of my happy (relatively) childhood years. I haven't beat this yet, but the amount of work put into it must be tremendous! Good work.
2004-05-22 23:01:47 by evilspacefart
A beatiful remake of this already superb game.
2004-05-22 12:54:02 by HillBilly
He did it again!
This time Lucasfan did not come up with a new story, but he and his crew put a remarkable effort in this project and came up with Maniac Mansion deluxe which is providing me with some of the funniest memories of my chidlhood. The VGA-colors look very nice but don't take away anything from the wonderful old mood. The scumm-interface is much nicer than the original one. And the best: the stupid secret door on the first floor is ALWAYS open and I don't have to worry about the copy protection anymore :) After so many years I was finally able to explore what is behind that door and I know what I will be doing for the next weeks, I will be trying to solve the secrets of the Maniac Mansion.
2004-05-21 10:02:40 by Totoro
You must be logged in to the forums to post comments.
© Adventure Game Studio 2022. Page design by loominous and Darth Mandarb; coding by AGA.
Page generated on 08 Aug 2022 at 02:25:10