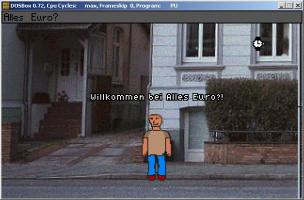 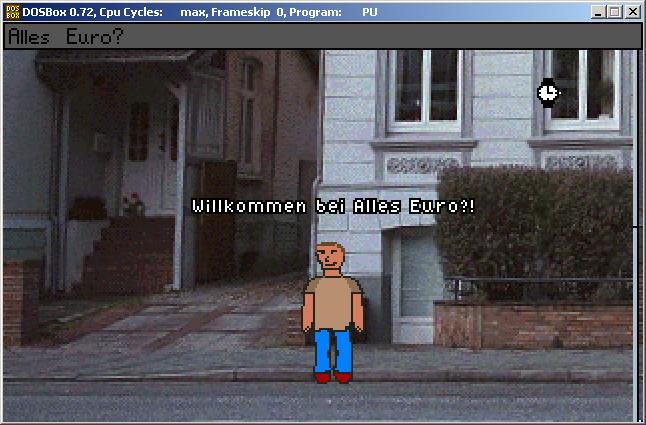 You play a guy, who doing an alternative civilian service (to avoid army). Doing so, he has to care for Grandpa Schmidt-Rheinfeld who is confused about the new currency - he's afraid to loose half of his money. So you've to get him a brochure and learn a lot about the euro. It's that easy

You probably need Dosbox to get this game working.

Game language is english, the mirror link leads to the german version.

This is a re-release from February 2000 and one of the oldest AGS-Games around. Besides it used to be an addition for an info-cd about introduction of the euro currency (although this CD was never released ;-)
See the people who made this game and any other games they've worked on >>
abstauber
Everything except music
16 other games: >>
Indiana Jones and the relic of the Viking
Extra scripting
Brothers & Wreckers (demo)
Last background of episode 12
TREX and Muscle SAM: A New Kickstart!
CustomDialogGui Module
CGA: Christmas Game Arcade
Everything except music
The Bum
German proofreading
Patchwork
Custom Dialog GUI module
Living Nightmare: Freedom
Rain Effect
Draculator II: Byte of the Draculator
character design
Rufus story
the 9-verb template
Roger's Quest
GUI module
Hitchhiker's Guide To The Galaxy Remake
Custom Dialog GUI Module
Celtic Chaos - episode two : fishermen's fiends
testing
Aeronuts
Graphics, Story, Scripting and SFX
Featherweight
Testing
The Vestibule (demo)
Background Art and Scripting
Indiana Jones and the Secret Chamber of Schloss Brunwald
everything except sprites and music

"The original version may have made sense to German players, but the English translated version seems broken with very little to do."