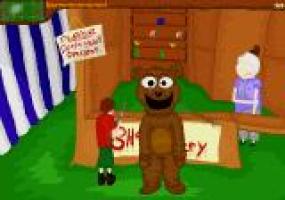 Daniel is having a bad day.

Forced to wear a rancid bear suit and endure endless torment from his boss, and an endless multitude of horrid children, just so he can afford to keep his small crummy suburban flat, Dan finally SNAPS!
See the people who made this game and any other games they've worked on >>
Duzz
8 other games: >>
A Tale of Two Kingdoms: Deluxe Edition
Sprite art
The Unicated
DuzzQuest2
A Tale of Two Kingdoms
Sprite art
The Historical League of Bouncy Boxing
Duzz Quest: An Egotistic Adventure
Game Creator
FIFA International Football 2004
Good Santa, Bad Santa

"Grr! Bearly Sane" is for you!