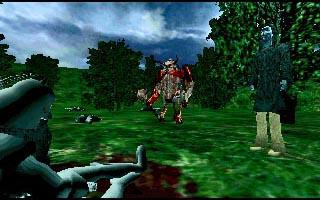 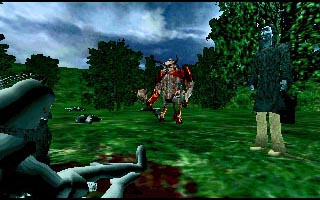 -NEWS-: The source code of this game is released. You can have it from the "Download mirror URL". A RPG using pre-rendered 3D graphics by Ahmet (CoolBlue-Gord10) Kamil Keles. I've used the engine, textures and models of Half-Life and some mods for creating pre-rendered 3D backgrounds. PREFERENCES *2 different endings changed by your decisions in the game. *Gaining exp. for weapons or magic. *Random events. *Turn-based fight system. *FPS view *Cut-scenes with cinematical camera pitches

STORY We had been walking for a long time and we were too tired... I was going to the Flea Castle, an outpost of our kingdom in the Kreatia Forest, with my knight friends fast. Because we had a very important report to give. The Black Poison (another name; the Armies of Darkness) was gathering again on the south of our kingdom according on the rumors, and we were sent to research it. The Black Poison was banished from Asporia by the human, elf and dwarf alliance 50 years ago. In these days, only a few mages who wears black robes and small groups of trovgs were left in Asporia. But the things that we saw on the south was terrible. The evil rages like night elves, vampires had appeared again and an army, which includes the strong rages like trovgs, hartsies, was getting prepared. So, we were taking this report to the kingdom in a hurry. Because the country wasn't ready for such a big war, so the war preparations should be started immediately. Our journey to the kingdom was hard. We had got lost our horses, goods and most of our friends in the small wars during our journey. May them sleep in peace... We had just entered the Kreatia Forest that night and we needed some rest. Commander Scorth decided to have camp in the forest. Commander Scorth... I liked him as if he was my father. My real father was a soldier who works for the kingdom, too. He was killed by a magic user who wears the black robe. We needed some wood for the camp fire, and it was my turn to collect wood that night. So I had set out to find some wood to the east. You'll play as a knight called Arleon who can fight and use magic in the game. If you use your weapons often, then you'll gain battle exp's. So you can play the game two times, as a mage or a fighter. There will be lots of events, but I don't want to spoil. Check the web site for more screen-shots A little note: The game's number is 446. It's also my school number. Nice change :)
See the people who made this game and any other games they've worked on >>
Gord10
Scenario, 3D levels, scripting
14 other games: >>
Lost Answers
Author
A Short Nightmare
Author
Utopia of a Tyrant
Author
Triangle Head's Adventure
Programming, arts and story
Self
Author
Rufus story
the Ahmet's AGS Fight Game module
Lost in the Nightmare: 'Save Our Souls'
Author
Ahmet's AGS Fight Game Remix
Scripting Sound and Original graphics
Are We There Yet? 2
producer
Lost In The Nightmare 2: Unforgettable Memories Demo 1
Author
Lost In The Nightmare v1.1
Producer/Story
Ahmet's AGS Fight Game 2009 - Source Code
Scripting,graphics
Great Stroke Off!, The
"Drunken Violent Bums" Video Game.
Lost In The Nightmare - Demo
3D mapping, scripting

Broken links, methinks
2011-09-15 19:31:32 by Andy
I don't really call that a RPG - much too linear. Too bad.
2008-11-07 18:55:34 by Marion
Great graphics, but the interface is not very good and the game is impossible to play. Not a true RPG but not a true adventure either.
2005-12-09 18:03:09 by XTChrisTX (ags_newbie)
Good idea. Nice gfx. But gameplay is horrible.
2005-09-03 13:36:51 by Signup
When I heard about this RPG, I was hoping for something at least playable. I had a hard time moving between screens, and I couldn't go anywhere besides two screens after you run into the guy with the pack. It was needlessly frustrating being stuck like that with a movement system that was horrible to begin with. Let us not comment on how overly simplistic and not even worth much the RPG system actually was.

I await the day I get to see a good nonconsole RPG system implemented to AGS. I will be the first in line to try it out and attempt my own game with it.