Great Stroke Off!, The 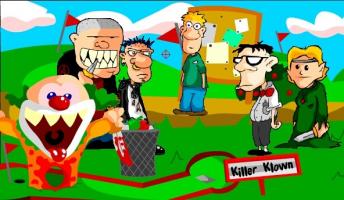 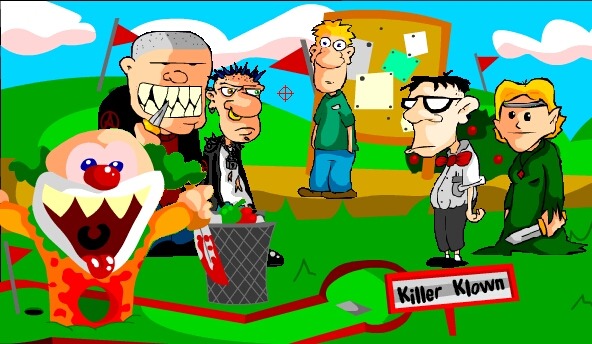 The setting of the story takes place in a type of small "Amusement Park" called "Stickz & Ballz". The main attraction of the park is the Mini-Golf Course (thus the Stickz & Ballz name), as well as a Haunted House of Mirrors and a Video Arcade, plus a large shop with snacks and souvenirs as well as more areas to explore. The main character in the game that the player will control, goes by the name of Ned Flobolid. Ned (who is around 16 years old) is working during his "summer-break" at the "Stickz & Ballz" amusement park, which is owned and operated by his Uncle Ernie. His parents gave him the choice to either work there for his Uncle during the summer, or to attend tutoring lessons at summer-school. So, Ned choose to work at the amusement park. The story takes place during the day of "The Great Stroke-Off Competition", in which teams are competing to win the trophy. During the opening scenes of the game, Uncle Ernie will tell Ned "Half of a Proverb", and make it as a riddle for Ned to solve. So, in the course of the game, Ned will also find the "answer to the riddle of the proverb" as well. Ned will have to do various tasks, solve various puzzles (some a bit bizarre), and interact with a few other characters in the game as the story unfolds. At one point during the game, Ned can choose to help and befriend one of two opposing teams (One team being a group of "Nerds" and the other team a group of "Punks"). Deciding on which team Ned decides to help win the competition, will decide on what different puzzles Ned may have to solve as well as affecting the direction of the story. *Note: This game should run fine on most versions of Windows.
See the people who made this game and any other games they've worked on >>
Barbarian
Programming,Story, Narration,Puzzles
5 other games: >>
Knight Quest for the Golden Ring
Programming, Story, Puzzles.
Bob Goes Home Deluxe
Beta Tester
Dark of Night
Game creator
Elevator, Rise from the Abyss
Game Creator
Escape From Evergreen Forest
Game Creator
HillBilly
All Artwork
2 other games: >>
Merry Christmas, Alfred Robbins
Story & graphics
Earl Mansin: The Breakout
Graphics, story & script
Eigen
All Music
Gord10
"Drunken Violent Bums" Video Game.
14 other games: >>
Lost Answers
Author
A Short Nightmare
Author
Utopia of a Tyrant
Author
Triangle Head's Adventure
Programming, arts and story
Self
Author
Rufus story
the Ahmet's AGS Fight Game module
Lost in the Nightmare: 'Save Our Souls'
Author
Ahmet's AGS Fight Game Remix
Scripting Sound and Original graphics
Are We There Yet? 2
producer
Lost In The Nightmare 2: Unforgettable Memories Demo 1
Author
Lost In The Nightmare v1.1
Producer/Story
Ahmet's AGS Fight Game 2009 - Source Code
Scripting,graphics
Lost In The Nightmare - Demo
3D mapping, scripting
Asporia: Hidden Threat
Scenario, 3D levels, scripting
..
Devlpmnt.Mesg. Forum & Ideas
1 other games: >>
Count Spatula, Volume 1 :: The Seafood Years
Creator

The music is great, dialogs are pretty good (albeit the balls "joke" gets too silly and you'll be reading it a lot), the GUI is really usable and the graphics and the animations are one of the best I've seen in an AGS game: they're well drawn, very appropriate for the intended atmosphere and, above all, their meaning is in all cases clear.

No pixel hunting on this one, and there's even re-playability (there are two ways to finish it).

Note to the author: Although I liked the GUI, I think that changing the order of the actions for no good reason is very counter-productive.