Barn Runner 4: The Prick Who Came In From the Cold 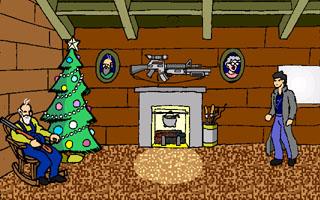 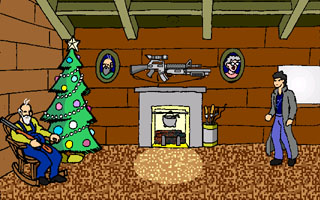 Download Options for Barn Runner 4: The Prick Who Came In From the Cold

It's snowing, you're freezing, you're a hundred miles from home and you're locked out of your flying car.

The future ain't what it used to be.

Barn Runner: The Prick Who Came In From the Cold is the fourth game in the Barn Runner series which began as terribly misguided spoof of Blade Runner / Escape From New York / and The Andy Griffith Show. It's the far future imagined through the filter of the 1980s! The game has a Christmas theme (sort of) and centers around a lazy, egocentric policeman in the distant future tasked with hunting down and destroying runaway robots who have had it with lazy, overbearing humanity and finally vented their mechanical rage on their hapless owners and anyone else within easy reach. Naturally, like all humanity in the future, the cop hates his job and doesn't really put a lot of effort into it. So it's up to you to make him accomplish anything. Don't worry, this isn't an action-oriented game and there are no arcade sequences. It only sounds terribly exciting, but rest easy: It isn't exciting in the least. I hope you enjoy my game. It isn't the greatest but I certainly could have done much, much worse. (And have on several occasions!)
See the people who made this game and any other games they've worked on >>
Ponch
40 other games: >>
SLEUTH
Voice acting
Barn Runner: Pucker Factor
Big Cheese
Headbanger's Heaven - A Rock & Roll Adventure
Game Tester
Oceanspirit Dennis: The Terror of the Ice Princess
Playtesting and general loafing about
Blue Lobe Inc.
voice acting & beta testing
Flophouse Hijinks (Deluxe Edition)
Brought the Party to the Wagon Team
2034: A.C. (After Canada) II [Bake Sale 2]
Lead Knob
Fridge Follies
concept, dialogs, scripting
Crankosaurus Prime and the Blue Crystal Pursuit V1.8: The Fangs of Fortune
Head Sheep Wrangler
Alien Cow Rampage: Orion Needs Your Milk!
Stunt Cow
THAT DAMN DOG!
Motivator
Ancient Aliens - The Roots of Sound
Additional Game Design and Testing
OSD Moby GearWhaleDX
Game Creator
Barn Runner: The Rich Dame Who Cut The Cheese (Bake Sale)
Big Cheese
2034 A.C. (After Canada) (MAGS)
Lead Knob
Barn Runner: The Mayor's New Dress
Big Cheese
Bolt Action
Executive Vice President of Beta Testing
Hubris - a Popular Pub Pastime
Testing
Escape the Barn
Testing, chief baker
RAM Ghost
Object Donation
9 Months In
Testing, Bake Sale Master
Zombie Attack (BAKE SALE)
Testing, Bake Sale Organizer
Night and Day (RON)
Testing
Draculator II: Byte of the Draculator
sound seeking
OSD Archipelago Adventures 1
Project Lead
Outrage Dreamer Roads 4-3 [MAGS]
Big Cheese
Chance Of The Dead
Testing
Oceanspirit Dennis: The Full Name Of This Game Won't Fit In The Subject Line!!1
Art, Sounds, Voice (LPR)
Barn Runner 5: The Forever Friday 3
Head cheese
Oceanspirit Dennis Gets Textual
The good sprites
OSD: The Wet Spot
Design and Line Casting
Barn Runner Halloween 1: Fully Automatic Mojo
The Big Cheese
OceanSpirit Dennis: A Ray of Hope
A victim of assets theft
Oceanspirit Dennis: The Naked & The Ninja
Grand Gaming Poobah
Oceanspirit Dennis: Pirates on the Poopdeck!
Barn Runner 5: The Forever Friday 2
Barn Runner 5: The Forever Friday 1
Barn Runner Xmas 2: Wreck The Halls
Barn Runner 1: The Armageddon Eclair
Barn Runner 3: Don't Jerk The Trigger of Love

How much fun can a game be with a strange old man in a rocking chair?

I did struggle with some of the puzzles, but never got frustrated due to the excellent and endless dialogue ponch has provided