Chance Of The Dead 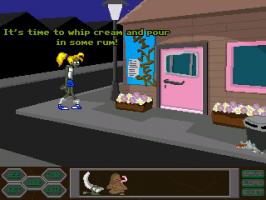 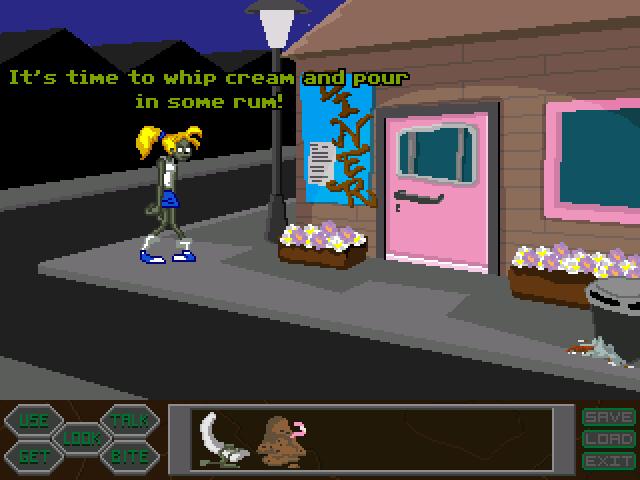 Five years after her demise, Janet Burdie is granted a "night out" to make her greatest wish come true: Submitting her signature cake to the famous C3 baking competition!

"This cute and enjoyable MAGS entry with a living-dead female protagonist, is given one last chance to correct some wrongs in her life. You'll chuckle at the jokes as she serves coffee and sandwiches while making her prize winning cake; I'm surprised she doesn't spill the coffee with her zombie walk. Excellent music and nice graphics. This short game is well worth the time."

Chance of the Dead is a cute and very wordy game about a cheerleader that is brought back to life from her way too soon death and she gets a second chance. It all ends in a bake off contest and you solve some puzzles while the entertaining and a bit too wordy story keeps you on track. Some funny SFX and a fitting soundtrack make it a game you should be playing right now. Or just watch the spoilerfilled longplay here:
https://www.youtube.com/watch?v=dgTIvXbX5-g
2018-01-28 22:58:49 by selmiak
What do you get when you cross a zombie with a coffee machine? Well, it is 'Chance of the Dead'! A quite lovable game with plenty of dialogue. It sometimes amazes me people can make these kind of games in one month alone.

This must have been a solid contender for the MAGS competition, and well I just checked and saw it had been nominated for some AGS awards. Surely proof enough to check out this game.

The artwork is great and there are some lovely animations for a lot of the actions. There were one or two items I didn't spot right away, but apart from that the puzzles are about the right difficulty and I never really got stuck.

My one criticism is that the intro intro is a bit on the long side, but once you get into the main game there's quite a bit of gameplay to balance that out. Length-wise its short (took me roughly half an hour), but that's still quite a bit longer than your average MAGS game.

Overall a really great game, if you're looking for a short but good game Chance Of The Dead is well worth your time.

2011-07-27 20:35:23 by OneDollar
This MAGS-game is really amusing and created with lovely graphics. It is not too difficult and has a nice atmosphere.
Especially that beautiful animation when Janet giggles and how she puts her legs when she walks are facinating to watch but there is a lot more. You should discover by your own! I also had a lot of fun on those funny comments of Janet and can recommend this game highly.
2011-07-27 19:51:18 by TanteTabata (Tabata)
Nice one Ghost - very cool story that's a bit different to usual. Great retro feel here too. Thanks for letting me help!
2011-07-27 02:16:13 by Mods (m0ds)
Had the pleasure to beta test it.
Sweet, with some lovely lovely characters. Even if it is very short you won't forget it easily!
2011-07-26 09:48:40 by bicilotti
You must be logged in to the forums to post comments.
© Adventure Game Studio 2021. Page design by loominous and Darth Mandarb; coding by AGA.
Page generated on 21 Oct 2021 at 05:35:31