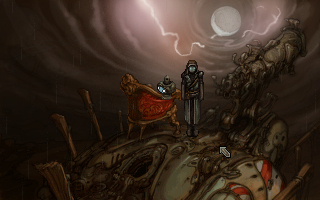 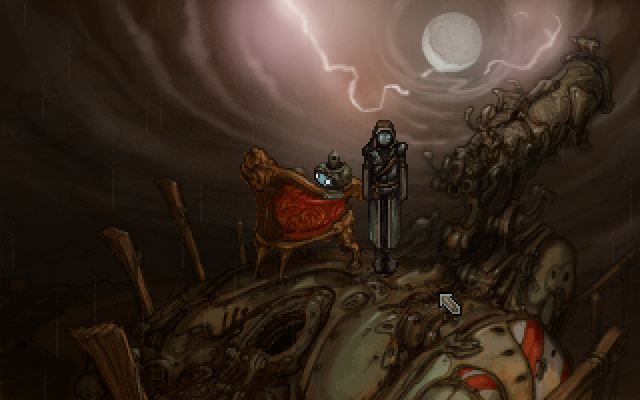 Primordia is a commercial game.

What happened to the humans?

Set in a post-apocalyptic world strewn with cast-off machines, Primordia tells the story of Horatio Nullbuilt, a stoic robot who values his solitude and independence. Horatio spends his days studying the Book of Man, sparring with his droid companion Crispin, and tinkering with the airship they call home â€” a peaceful existence that becomes threatened when a rogue robot steals the energy source that the pair needs to survive.

When Horatio and Crispinâ€™s search for energy brings them to the dazzling city of Metropol, the simple quest to recover their stolen power core leads to unexpected discoveries about Horatioâ€™s origins and a new understanding of the legendary humans who walked the earth before him. Features: An epic storyline about the extinction of the human race Voiceover work starring fan favorite Logan Cunningham (Bastion) Gorgeous post-apocalyptic setting Optional puzzles – learn more about the world the more you play

A strong, atmospheric world that you canâ€™t help but want to experience more of. -Capsule Computers

One of the most artistically exceptional games in years. -The Arts Desk

Great atmosphere and plot. Contains mature, original and multi-dimensional writing with much attention to detail. There's some very original perspectives and philosophical concepts touched upon in this game, and nothing is black & white. Really immerses you in its world and had me thinking about it long after.

Animations are a bit robotic (ha), so couldn't give it a full score, however, I have no doubt this is the best AGS sci-fi bar none.

This game is fantastic. The setting is wonderful, unlike anything I've played before, and full of atmosphere. The art is amazing, and the programming is top notch. The story itself is intriguing and unique, and the voice acting is superb. I think that the pacing and puzzles are perfect. This is a great example of what adventure gaming is all about.

I can't think of anything negative to say about this game, and I fully intend to buy the full version.