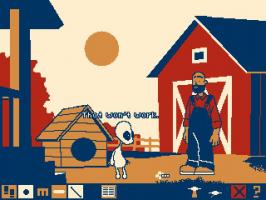 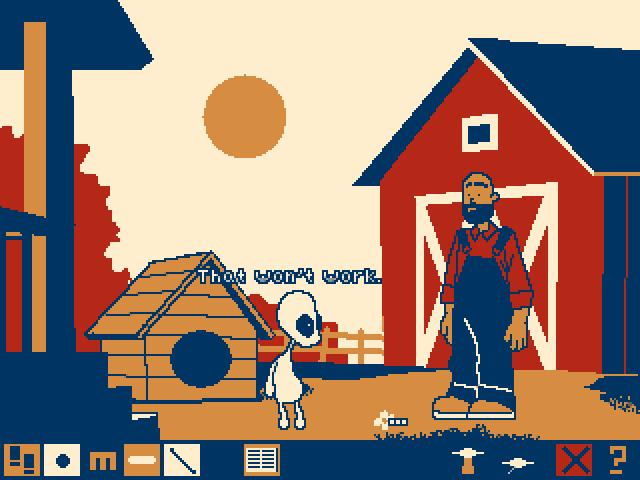 "Fun, beautifully animated and stylishly colorized comedy adventure with solid puzzles and most enjoyable soundtrack. Gray can be also overly talky at times (the main character memorized a wikipedia-worth of trivia) and could use a more interesting main quest for an adventure of its length. But this are minor problems in this otherwise well-thought-out traditional point-and-clicker."

I got stuck on this game ages ago and put it aside as I figured I'd nearly got to the end anyway. Then I came back to it, got the hang of what I should be doing and found out how wrong I was :) There was loads of game left to play, and I loved it!

This game has similar humour to the author's later game, also with a colour in the title. I chuckled all the way through. Great game, and I can't believe the scripting and the beautiful artwork were done by the same talented person.

Put it at the top of your to-play list!

2017-01-03 16:41:49 by paolo
Gray is an interesting character with lots to say about the game world. The animations are great to watch and the puzzles were fun to figure out. A very well made game that will keep you playing until Gray finds his saucer.
2013-06-19 18:28:59 by NickyNyce
Great graphics to enjoy with fitting music and atmosphere, nice gameplay idea but the main character is just too verbose and does not get to the point.
2013-04-06 13:41:15 by cat
This is a strong game with lovely visuals, but Gray's incessant verbage takes away some of the immersion.
2013-04-02 23:35:50 by Stupot
Thanks for the very kind reviews, everyone :) Also, now you can follow your favorite (obviously!) alien on Facebook: http://www.facebook.com/pages/GRAY/465049040221383 Like it for video-illlustrated trivia, screenshots, little "making-of" tidbits, polls -- as well as news about current developments, such as updates, new translations (starting to work on German version soon). I still have some fun things in store for this project!
2013-02-04 19:45:39 by Fitz
A great game. Don't let the four colors fool you, the author has achieved something great with the art in this game. The images are clear, functional and interesting, the animations are very smooth, and the original soundtrack and occasional sound effects create a great atmosphere.

The dialogues are also very well written and keep things interesting between puzzles, though sometimes it was a bit too much text. I find the author's writing much more stylized than commonly found in adventure games.

As somebody else already wrote, try every possible action to get the full experience this game has to offer.

2012-12-15 10:21:39 by jkohen
I really enjoyed this game. This game has its own kind of logic but it is fun figuring it out.
2012-12-14 19:33:43 by mdm2968 (mmenees)
Oh that is a great game.
After first being totally puzzled by the think out of the box puzzles I finally got into the mood for them and really enjoyed it! Actually the challenge made it even better :)
And the intro and end movies in all their 4 color glory are worth a directors cut with audio commentary

2012-12-13 20:18:18 by selmiak
This one is a must play for all who like p&c adv in retro style with humor and a lovely little smart asses as main character!
Gray has to tell a lot about really everything! The graphics in only FOUR! colors are amazing and the animations are incredibly cute. Tons of very well fitting sounds (often sooo funny) and unique music and ...
... and I recommend you first to try all the "wrong" options (not to miss anything ;-) ]! It was a real big fun testing it.