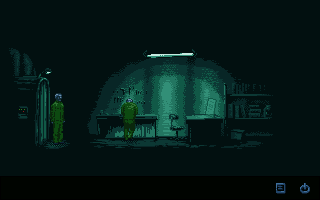 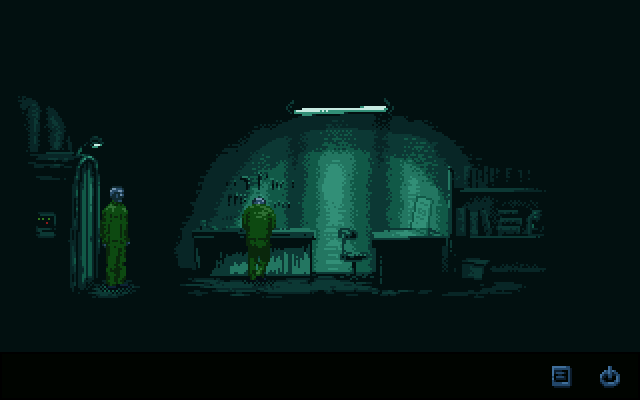 Drawn and animated with great pixelart with a dark and minimal colorcount used for great effect Camp 1 tells the story of Korski, an inmate in Camp 1 on a foreign planet. You start by packing the freighter and finally leaving the desolate place when everything goes wrong, your ship crashes and you get drawn into a huge conspiracy. Some really demanding puzzles (especially in chapter 3, thus the name) are for the hardcore adventureres, while other item puzzles could have been better with at least some hints of what the game wants from the player, but overall Camp 1 is a great experience and even moreso because it is free to play.

2018-04-16 12:51:18 by selmiak
I finally got around to playing this game, and while some puzzles and pixel hunting were too obscure for my taste (I gave up and looked up a walkthorough early on) the game more than makes up for it with somber yet beautiful visuals and a most compelling story and atmosphere.
2017-09-29 10:45:16 by Blondbraid
This game was fabulous! good plot, really built up to a crescendo! worth the time. couple of puzzles required hunting on screen and being sure the character "discovered" text first. only slightly annoying. walkthrough helps clear the cobwebs.
2017-09-22 17:49:29 by dav
Great immersion. Though I'm not sure the genders are correct, lost in translation perhaps?
2016-04-01 21:17:15 by mahli
Excellent piece of work, by far one of the best adventures I ever played and I am not easy to persuade at all. An absolutely must play.

Congatulations to WaxWing Games I look forward for new releases.

2016-03-18 17:33:33 by mercenario
Superb presentation and atmosphere. A well thought out and entertaining variety of puzzles. Unfortunately, some inventory puzzles were illogical and there was some pixel hunting to do which forced me to consult a walkthrough to proceed.
Overall, a great game.

2016-03-15 10:31:59 by Two Tales
This was such an awesome experience... The story was interesting, the world building as well, and the art and sound design was just magnificent. While there was some pixel hunting at times, I feel the variation in puzzle design worked really well. Probably my fav AGS game of 2015 and I can not recommend it enough!
2016-03-12 12:17:02 by SeamanNaranja
This is a real gritty game following a convict just about due for his release. But lo and behold, his last mission is going to be more of a mission than he first expected...

There are some excellent puzzles in this adventure, with good atmosphere, and animations, from a story that is of solid length.

I think some of the characters look quite man-like, when they should be female, but I guess this is a prison-esque game.

The story and characters will haunt me for years to come...

The feelings of isolation and paranoia suffuse the game and the toned-down retro palette of colours only adds to the grim mood...

No lack of cool puzzles either...If sometimes a tad hair-tearing before figuring them out...

2015-07-18 14:21:15 by Mandle
The atmosphere in this game is excellent. The music is simple but fits really well. I wish the puzzles weren't so illogical/difficult/pixel hunting oriented... But overall, great game!
2015-07-11 22:29:46 by ArgyBoi
The best adventure game I've played in a while in terms of story and atmosphere. And it looks so good! However, for me most of the puzzles felt frustratingly difficult to grasp and would have required a tad more guidance. A lot of the time I didn't know what my next objective was and how to achieve it, despite the in game notes. Had to take quite a few peeks at the walkthrough. Whether they were designed to be too difficult or I was just too stupid to get them, I don't know. That said, overall I truly enjoyed this game very much and would recommend it to any hard core adventure gamer.
2015-06-27 23:35:18 by Ubel
Great game.
I almost got discouraged at the start, but the atmosphere just sucked me in and kept me engaged. Captivating story. As long as you bear in mind that you need to keep searching around, you will like this game.
2015-06-21 19:22:15 by MiteWiseacreLives!
Great game! Good, atmospheric graphics, excellent puzzles and intriguing story. And the dialog is superb - very realistic. I'm looking forward to great things from this team.
2015-06-12 04:02:59 by AndyfromVA
This is one of my favorite AGS games ever. Superb atmosphere, graphics, animations, story and puzzles. I loved the ending too, which really made this game memorable. If you haven't played this game yet, do yourself a favor and click the download button. Thank you for this FREE gem!
2015-06-08 13:52:53 by NickyNyce
AGS games just keep getting better and better, and this one is no exception. A very atmospheric game accomplished with, what I shall call, a gritty style of graphics. Interesting story and clever puzzles. I was sorry when I reached the end which was colourful in more ways than one.
2015-06-07 12:59:20 by BarbWire
Obviously, a lot of work went into this. Every single aspect is excellent. Fantastic visuals, wonderful colours, intense atmosphere, clever puzzles - did I mention the colours? The limited palette works so well!

Marvellous game! Anyone who hasn't played this yet, go and do so. You'll love it.