Danny Dread is On Call 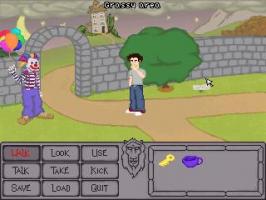 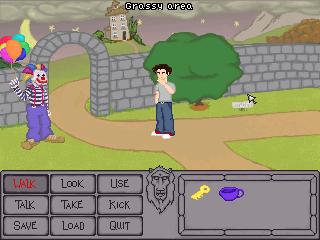 It's just typical isn't it. You're planing on having a relaxing day, maybe going to the movies or having a quiet drink at home with friends and what happens?

You get called up by your boss and next thing you know you're expected at work within the next 20 minutes.

"Some awkward puzzles, and only three locations to explore, but humorous dialog and colorful graphics are a plus. Storyline could be stronger, but overall, game is solidly produced."

I am surprised this game got nominated for awards and got a four cup player rating. Perhaps the bar has risen since 2009.

Don't get me wrong though, this to me is definitely a solid three cup game. There is some quirky humour and fun puzzles to a game I very much enjoyed.

I didn't like that you couldn't skip dialogue in a cutscene, which, for a short game, this thing seemed to have many of. Also, once you get the sheep the game still goes on for some time but it's not really interesting any more at that point.

On the bright side, it had some nice animations, I really liked the kid playing and the monster. Also, it was a nice touch that you could switch commands with a right mouse click, it really made gameplay smoother.

2011-01-08 14:57:48 by MrEdwardNigma
Nice little game with good jokes and puzzles.
2010-02-07 21:25:57 by Ascovel
This is one of the best examples of a fun AGS game. The puzzles were clever and just hard enough, but all made sense. The visual style is superb, the music fits perfectly, and the dialog was funny. I'm still laughing at the "object of my desire" line. While not particularly long, it definitely makes the most of its time; I noticed a couple parts where a lazier designer could have ended the game prematurely or given a puzzle a lame shortcut, but the game is solid all the way through. Go play it.
2010-01-12 17:21:09 by ddq
puzzles - graphics - story - sound. all fits perfectly together!