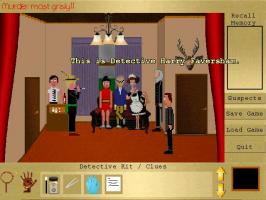 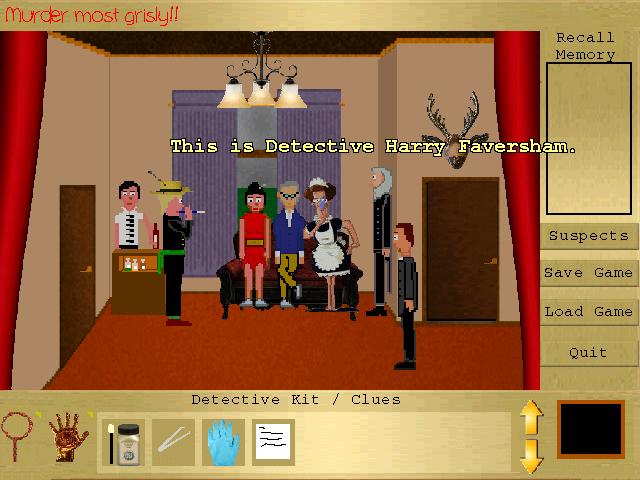 MURDER MOST GRISLY!! New upload * Please note that a GUI shown in image has been revised. A Whodunit mystery starring super sleuth Detective Harry Faversham who has a nose for smelling clues! The year is 1910. The place, London. Lord Harrington has been murdered by a machete through his skull! You set out to Harrington Manor to find the murderer! There are 6 possible suspects. Who would want him dead? Who has the motive, means and the opportunity? * Why has the snooker room door key gone missing? * Why was there a power cut? * Did someone steal the machete used for the brutal killing? * Was Lord Harrington a philanderer? Seek out clues, be observant, listen to suspects bickering and ask questions to determine who murdered Lord Harrington. Was more than one person involved? Use your deductive talent to decide those responsible. As David Frost would say: "Remember, the clues are there". When you are ready you have the opportunity to arrest your suspect(s) for murder. Take your suspected murderer(s) to court and hope to get a conviction. Includes a Memory system (Click memory Word in list and talk to suspect). Theater style production. Special thanks to the testers of this game who patiently corrected my grammar. ======================================================== Techs: 640 x 480 resolution 16 bit colour DirectDraw 5 Audio Music and sound
See the people who made this game and any other games they've worked on >>
steptoe
Everything
9 other games: >>
The Visitor 2
Testing
The Shadow Avenger: It's personal!
Everything
Potato Head - Sweet Attack!
Everything
The Sacred Tablets of Tibet
Everything
Jetpack Sam 1
Everything
SPIT BOY V2.1
Everything
MONEY CAB
Everything
Sinbad: Island of Korkus
Everything
Very Bad Taste: Dels don't hide!
Everything
Narushima
Proofreading/testing
4 other games: >>
Skumring: Extra Noir Edition!
Testing
The Visitor 2
Testing
Maniac Mansion Mania - Episode 53 - The Klaus strikes back
French translation
Maniac Mansion Mania - Episode 9 - radioactive
French Translation
Renodox
Proofreading/testing
8 other games: >>
The Man From Fugue State
BETA testing
Conspirocracy
Testing
Ancient Aliens - The Roots of Sound
Testing
House of de Sade
Grammar and Spell checking.
Skumring: Extra Noir Edition!
Testing
Baldy's Adventure
Grammar and play testing
ELF: The 4 Elements
Proofreading AND Beta testing.
Potato Head - Sweet Attack!
Testing and grammar checking
Nedshi
Proofreading/testing
1 other games: >>
The Sacred Tablets of Tibet
Pt Testing + Video Dialog

You must find no more than two murderers. This doesn't give away much but near the end might stop some people throwing in the towel.
2017-03-07 08:50:23 by dav
In one way it's rather a simple game, but quite entertaining.
The "memory" part of dialog wasn't first apparent to me; the game is a bit "learn as you go" in a less than ideal for me. Also I think it should be said you must find no more than two murderers. The clues are good but probably aren't enough to allow clear detective work.
All in all I am glad I played it and persevered until it was solved.

I found the gameplay a bit underdeveloped, not only because the game is strictly linear.

The graphics could have been nicer, but in general they were passable and didn't bother during gameplay.

For future games working in a team with different strengths can give better results.