Taste the blood of darkness 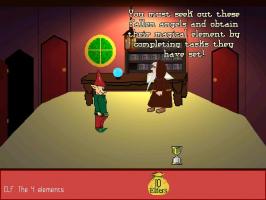 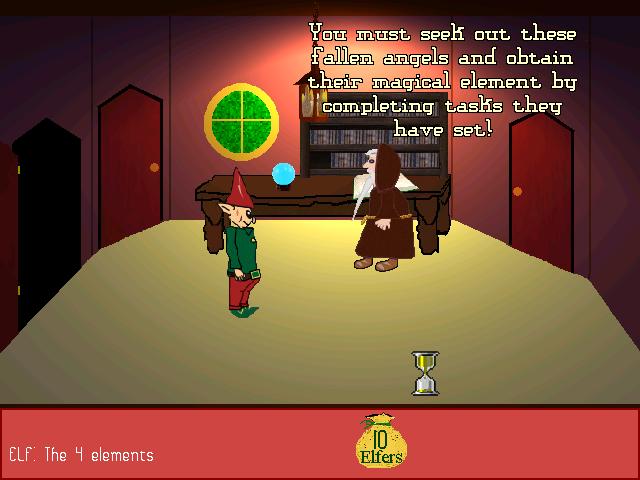 Join Elfie the Elf once again as he is called upon to stop an evil alliance between a 'circle of Fairies gone bad' and Melkor 'The Dark One' who was condemned 1800 years before by the Elf gods and is now a prisoner in a cosmic cave! The Fairies have found a way to tap into Melkor's powers and use them for their own ends!! The land of Elfenor is a religious, peaceful and joyful elf community. Early one morning the elf Chief Chancellor, Morgulon, was praying to Seldarine, their religious statue to all the elf gods. Suddenly the statue of Seldarine opened its eyes and spoke to him warning of a great uprising on the horizon by a circle of fairies gone bad! And so the elf Chief Chancellor gathered the men folk of Elfenor to deliver the bad news. * Can you find the hobbit prophet's house and then solve his riddle? * Obtain a 'warp' map to quickly get around locations. * Buy and sell items at a supplies shop. * Complete tasks set by 'fallen angels' to obtain the much needed magical elements. * Fight an armed skeleton! * Can you obtain the seed pod from a giant carnivorous plant??!!!! * Seek out a mystical destruction device! * And more.... * Finally, stop the 'Fairies gone bad' from beginning an evil uprising by destroying Melkor's astral gateway!! 'Warp' animations included for effect. Thank you if you leave a comment ;)
See the people who made this game and any other games they've worked on >>
Slasher
Creator, Writer, Graphics, Scripting.
72 other games: >>
Taste the blood of darkness
Story, Creator and Scripter
Bartolomeo, misled by circumstances, learns that appearances can be deceptive
Testing, proofreading
The Spider's Web
Creator and Scripter
Stuck on you
Creator and Scripter
Distance no object
Creator and Scripter
Perceptions
Creator and Scripter
We'll meet again...
Story and Creator
Skyfall
Creator and Scripter
Sandi Knievel: Stunt Rider
Creator and scripter
Frozen Kingdom
Everything
Fritz
Everything
Headbanger's Heaven - A Rock & Roll Adventure
Game Tester
Fashion Girl
Everything
Create your own game: Your dreamy Christmas
Everything
Night Witches: Women of the clouds
Everything
Desmond: The 'Thing' from another world!
Story, Characters, Graphics and Dialogs
Maelstrom Obscura: Case 1
Story, Scripting, Dialogs, Implementation. Sound editor and Odd-Job man...
Cave of Avarice
Puzzle design, writing and testing
New Kid Gotta Steal Somethin'
Testing
Ego in Planet of the Apes
Testing
Santa and the orphanage
Everything
Scarecrow and his quest for a brain
Everything
Dr. Chuckles' miniature world of madness.
Scripting, dialogs
Jason and the Golden Apple
Everything
The Campaign Of Daphne White
Story, graphics and scripting.
Stories of the unexpected: 'Until further notice'
Everything
Groundhog
Everything
The Rat Pack Do Cheesy Castle
Everything
When Time Stops
Everything
FrightFest: Dracula vs Frankenstein vs The Mummy
Everything
Finger of suspicion
Story and scripting
Fallen Hero
Story and scripting
Captain Disaster in: Death Has A Million Stomping Boots
Sound engineering support
It's a Bugs Life
Everything
Conspiracy: Below-Zero
Story, backgrounds and scripting
The Gourmet
Everything
Fearaphobia
Everything
The Execution of Anne Boleyn
Testing
Fred and Barney meet the future
Everything
10 Ways From Sunday
Voice Acting
Noah's Quest
Everything
Splinter
Story, Programming and various voices
One spy too many...
Everything
Hyde and Seek
Game Idea and developer
A Place In The Sun
Testing
Sonic and friends in: Club House
Everything
Gone Boat Fishin'
Everything
Sprouts of Evil
Everything
Quest for Ekoban
Story, creator, scripter
Blackudder: To doubloon or not to doubloon
Everything except music
Jumpin'Jack: the bean powered kid
Everything
The Man From Fugue State
Alpha testing
Gone fishin'
Creator, graphics and scripting
GHOSTCATCHERS
Author, graphics and scripting
When the worlds calls...
Creator, writer and producer
Generation Fun
Everything
Let's Cook: with Koala
Story and scripting
MONSTER WANTS IN
Tester
Beyond Horizon
Story, graphics and scripting
Tomb Hunter: Ramitupem
Creator, Story, Graphics and Scripting.
DarkForce: Peace among nations...
Story, scripting and graphics.
Feng Shui And The Art Of TV Reception
Testing and feedback
The Hobbit: Rise of the Dragon King
Story, Creator, Scripter, Dialogs, Graphics, Animations.
Beyond Eternity episode 1
testing
The Condemned
Creator, Scripter, Backgrounds and Sprites, sfx.
JACK
Creator, story, graphics and scripting.
Speed Buggy: Manifold Destiny
Playtesting
Deadly Consequences!
Creator, sprites, scripting, male voices
DSM: Are we alone?
Creator, Writer, Graphics, Scripting.
Mysteries of Peak Valley: Case 2 The White Lady
Voice acting, testing
House of de Sade
Creator, Writer, Graphics, Scripting.
ELF: And soon the darkness...
Creator, Writer, Graphics, Scripting.
Renodox
Proofreading AND Beta testing.
8 other games: >>
The Man From Fugue State
BETA testing
Conspirocracy
Testing
Ancient Aliens - The Roots of Sound
Testing
House of de Sade
Grammar and Spell checking.
Skumring: Extra Noir Edition!
Testing
Baldy's Adventure
Grammar and play testing
Potato Head - Sweet Attack!
Testing and grammar checking
Murder Most Grisly!! Whodunit?
Proofreading/testing
Blount
Beta tester.
3 other games: >>
The Man From Fugue State
Alpha testing
Mudlarks
Testing
Reon Quest Episode 2: Escape From Bully Island
Beta Testing

Another title in a promising series. Impressive settings and a map that lets you move between different areas make this game a good, short time investment.
2013-01-18 10:56:10 by soualhi1
ELF: The 4 Elements is an enjoyable game suited for beginning point and click adventurers. The plot, puzzles and environment are simple, enjoyable and designed well. It took me about 30 minutes to complete this game.

I look forward to Elfie's next adventure.