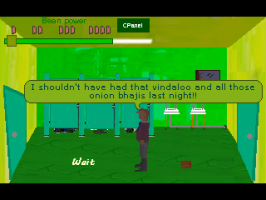 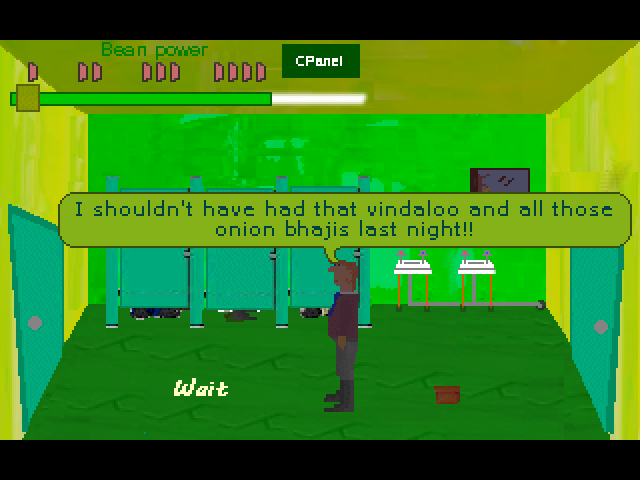 --------------MAG entry for May 2016------------ (Updated 31:05:16) Jumpin'Jack: the bean powered kid. Short game... humorous and at times sad... very stonesy' and contains some bodily function humour. Jumpin' Jack: the bean powered kid is a kind of fairytale meets superhero. After the boat that Jack (real name Woody) and his parents were on hits underwater rocks their boat sank and Jack got washed up on the shores of a cornish village. Jacks' parents were never found and pronounced dead. Gramelda, the villiage witch, took Jack into the Blackstock family and raised him as their own teaching him the black magic spells of the Blackstocks' legacy. Jack was not cut out for all this evil black magic as he dreamed of becoming a superhero like superman and batman. Jacks' stepmother made Jack a costume not realising Jacks' good intentions and when she realised that her Jack was going around doing good deeds it angered her to a point where she told him to leave home until he came to his senses and became a full blooded Blackstock black magic wizard. With this, Jack leaves home with only his hero costume and a few encharted beans and continues his quest to become a super hero helping anyone who needs help and dismissing violence. Then he comes across Buddy Love the school bully who thinks himself as a Ronnie Kray! Without using any violence how can Jack do good over evil and will his stepmother Gramelda ever take Jack back into the Blackstock family?
See the people who made this game and any other games they've worked on >>
Slasher
Everything
69 other games: >>
Stuck on you
Creator and Scripter
Distance no object
Creator and Scripter
Perceptions
Creator and Scripter
We'll meet again...
Story and Creator
Skyfall
Creator and Scripter
Sandi Knievel: Stunt Rider
Creator and scripter
Frozen Kingdom
Everything
Fritz
Everything
Headbanger's Heaven - A Rock & Roll Adventure
Game Tester
Fashion Girl
Everything
Create your own game: Your dreamy Christmas
Everything
Night Witches: Women of the clouds
Everything
Desmond: The 'Thing' from another world!
Story, Characters, Graphics and Dialogs
Maelstrom Obscura: Case 1
Story, Scripting, Dialogs, Implementation. Sound editor and Odd-Job man...
Cave of Avarice
Puzzle design, writing and testing
New Kid Gotta Steal Somethin'
Testing
Ego in Planet of the Apes
Testing
Santa and the orphanage
Everything
Scarecrow and his quest for a brain
Everything
Dr. Chuckles' miniature world of madness.
Scripting, dialogs
Jason and the Golden Apple
Everything
The Campaign Of Daphne White
Story, graphics and scripting.
Stories of the unexpected: 'Until further notice'
Everything
Groundhog
Everything
The Rat Pack Do Cheesy Castle
Everything
When Time Stops
Everything
FrightFest: Dracula vs Frankenstein vs The Mummy
Everything
Finger of suspicion
Story and scripting
Fallen Hero
Story and scripting
Captain Disaster in: Death Has A Million Stomping Boots
Sound engineering support
It's a Bugs Life
Everything
Conspiracy: Below-Zero
Story, backgrounds and scripting
The Gourmet
Everything
Fearaphobia
Everything
The Execution of Anne Boleyn
Testing
Fred and Barney meet the future
Everything
10 Ways From Sunday
Voice Acting
Noah's Quest
Everything
Splinter
Story, Programming and various voices
One spy too many...
Everything
Hyde and Seek
Game Idea and developer
A Place In The Sun
Testing
Sonic and friends in: Club House
Everything
Gone Boat Fishin'
Everything
Sprouts of Evil
Everything
Quest for Ekoban
Story, creator, scripter
Blackudder: To doubloon or not to doubloon
Everything except music
The Man From Fugue State
Alpha testing
Gone fishin'
Creator, graphics and scripting
GHOSTCATCHERS
Author, graphics and scripting
When the worlds calls...
Creator, writer and producer
Generation Fun
Everything
Let's Cook: with Koala
Story and scripting
MONSTER WANTS IN
Tester
Beyond Horizon
Story, graphics and scripting
Tomb Hunter: Ramitupem
Creator, Story, Graphics and Scripting.
DarkForce: Peace among nations...
Story, scripting and graphics.
Feng Shui And The Art Of TV Reception
Testing and feedback
The Hobbit: Rise of the Dragon King
Story, Creator, Scripter, Dialogs, Graphics, Animations.
Beyond Eternity episode 1
testing
The Condemned
Creator, Scripter, Backgrounds and Sprites, sfx.
JACK
Creator, story, graphics and scripting.
Speed Buggy: Manifold Destiny
Playtesting
Deadly Consequences!
Creator, sprites, scripting, male voices
DSM: Are we alone?
Creator, Writer, Graphics, Scripting.
Mysteries of Peak Valley: Case 2 The White Lady
Voice acting, testing
House of de Sade
Creator, Writer, Graphics, Scripting.
ELF: The 4 Elements
Creator, Writer, Graphics, Scripting.
ELF: And soon the darkness...
Creator, Writer, Graphics, Scripting.