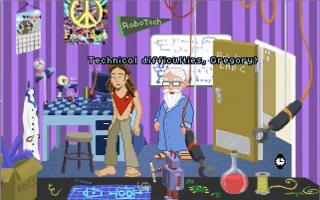 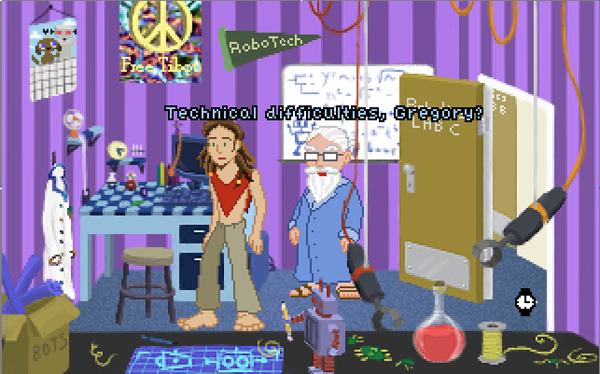 Groovy Greg set out to build robots that could love. Instead, he got the nanobots. Although the bots were designed to solve problems as a team, all their trial runs seem to end with the sound of tiny metallic fists meeting tiny metallic torsos. It’s enough to make even the most laid-back hippie want to tear out his dreadlocks. Now, with the evil Professor Killfun threatening to give him a failing grade, Groovy Greg has almost given up on his experiment. Little does he know that his beloved bots are about to meet an even bigger challenge than they had been programmed for... Nanobots is a classic-style point and click adventure game that lets you take control of Hotbot, Brainbot, Tallbot, Audbot, Strongbot, and Chembot as they race to save themselves from being turned into scrap metal. Can they make use of their surroundings, fashion an escape plan, and avoid coming face-to-fist with Professor Killfun? Only if they give peace a chance.
See the people who made this game and any other games they've worked on >>
The Ivy
Design, art, writing
4 other games: >>
Little Girl in Underland
Design, Art, Writing, & Propaganda
Blackwell Unbound
Sprite animation and background art
What Linus Bruckman Sees When His Eyes Are Closed
Xarnax and Xarnax Dialogue, Beta Testing
Spooks
Design, art, writing
Vince Twelve
Scripting, debugging
11 other games: >>
Forest
Everything Else
Resonance
Design, story, programming, additional art
Blades of Passion: An Oceanspirit Dennis Adventure
Voice acting
∞ bit
Design, Scripting, Art, Sound
Frantic Franko: Bergzwerg Gone Berzerk
play-testing, beta-testing
The Dwarven Dagger Of Blitz
some testing and tips
La Croix Pan
Beta-Testing
What Linus Bruckman Sees When His Eyes Are Closed
Design, Writing, Scripting, Art
Spooks
Scripting, debugging
Domestic Conspiracy Demo
Design, Writing, Scripting, Art
Anna
Design, Writing, Scripting, Art, Sound
The Scorposer
Music, sound effects
4 other games: >>
Magical Whatever Girl Rocks Out In The Stone Age
Original Theme Tune
Duty and Beyond
Music, Sound, Beta-testing.
Spooks
Music, sound effects
Da New Guys: Day of the Jackass
The music
Sheepisher
Beta testing
TheJBurger
Beta testing
4 other games: >>
Gemini Rue
Writing, Design, Art, Programming
ColourWise
Beta Testing
Chatroom
Everything except sound
La Croix Pan
Graphics, Animation, Scripting, Design,
voh
Beta testing
1 other games: >>
Wizard Hangover ExtreamZz!!
Everything

Won, Best Programming in an Adventure 2008

"Another fine game from The Ivy. Clever, though at times difficult, puzzles compliment a funny and engaging story. Some (very) minor technical glitches don't detract from a game that is well worth playing. Recommended!"

Brilliant game concept. There's another similar game by the same author on Steam. It's called Puzzle Bots. Great game too.
2020-09-10 06:21:41 by lanchong
I really liked the idea and concept, but that music got to my head after a while and the puzzle became somewhat tideous. Overall a cool game, but maybe not for everyone.
2016-07-22 22:45:15 by 6581
This was the first AGS game I ever played and it was and still is the one that got me hooked on the engine for both playing and developing games...

2015-07-27 09:26:17 by Mandle
Close to perfect! A couple of the puzzles were odd enough that I had to check a walkthrough but apart from that, this is great. The robots' personalities are distinct and charming, while the different look at how to interact with a room of adventure game objects keeps it interesting.
2013-05-26 01:44:49 by elegantmechanic
The idea of the game is really great and visually it's a beautiful game. The story is quite good. Unfortunately, the inventory system and the puzzles are pretty bad - all the puzzles are excessively tedious. Potions MUST be done in a strict order, otherwise the game must be loaded back and lots of fetching of items must be repeated. I gave up on it after having to redo the potions several times because I put ingredients in in the wrong order. (Even though I had the right idea.) The ability to put down items would help a lot.
2010-05-10 00:22:02 by Traveler
Very original, intriguing concept, nice graphics, clever dialog, funny. I loved the unique, interesting personalities of each bots. I was sad to see the game end and I'm looking forward to the sequel - there's got to be one. The puzzles can be hard at times. But persevere and, if necessary, consult the hints (they're online if you know where to look) and you'll be rewarded by a great gaming experience.
2009-11-08 23:11:58 by AndyfromVA
Works like crazy! The gameplay and the slick interface reminded me of a construction put together by some artist watchmaker. Yet controlling all the nanobots requires quite a lot of work (mainly walking around). Also, I had serious difficulties with solving some puzzles. But I don't think they were (completely) unfair and I did enjoy the challenge.

Overall, a great effort and a game world that makes your own one a cheerier and brighter place.

2009-06-14 13:56:39 by Ascovel
I loved the game. The challange was doing things in the right order so that you could move to the final goal. There should be a sequel
2009-06-07 08:20:16 by Desiree Ann Watson (desimaui)
Very different and amazing concept. Fantastic story, i felt like i was watching Toy Story. I liked the idea of teamwork of nanobots and funny dialogs between them. This game should have been given The best game of 2008 award.
2009-04-15 13:11:51 by proximity
Hello, my name is Joel, from the french AGS forum.
I want to translate your game in french.
If you agree, send me an email to this address:

When I initially saw that the game had six main characters, I was a bit worried about stuff like unequal roles, similarity, and lack of personality. However, once I got down to playing it, I was delighted to discover that none of those problems surfaced. All the characters were well thought-out and wonderfully portrayed. I especially liked Strongbot's sensitivity - it was a clever idea to make the most useful bot ocassionally unusable.

"Some people say that we're all godless hippies down here.
Those people would be right."

Not sure if I got that right, but great lines! I think I should put them in my signature...

I haven't had much time to play games lately, so I'm glad I picked this game.

2008-07-20 12:15:20 by jkohen
Okay, this is a gem. It really is. Great concept, sweet story, well thought-out characters (strongbot for instance), lots of humour, and excellent graphics. I'm definitely gonna keep this one. i'm also impressed by the great detail (Could audbot please move?), chembots acrobatics and the fact that, though this must have been one tough job to program, there were hardly any glitches whatsoever. Only one i noticed was that sometimes the wrong bot said that he wouldn't pour acid on the postcard. This game is better than some commercial games i've played and had to pay for. Overall, EXCELLENT JOB. APPLAUSE FOR YOU!!! (And of course, looking forward to a sequel, if there will be one)
2008-07-10 19:26:36 by Tinkerer (tinkerer)
A fun, quirky, and well-polished puzzle-based game. Totally worth the hour spent to play.
2008-07-04 03:11:25 by Jeffers
I like a surprise or two in my games, and Nanobots delivered that. First I though, hey, someone played SUSPENDED (an old Infocom text adventure where you had different robots acting as your senses) a lot, but this game is, well, just special. I'm not finished yet, but from the very start you will find shiny little details everywhere. Six playable characters, each one with a beliveable and distinct personality, as well as a special skill to use. Lots of witty writing, and ever so often that feeling that this game is just so clever. While small in scope (no pun here), there's a lot of love in each tiny bot here. The puzzles are good and make sense, though there are some where a less "open approach" would have been nice- but that's the only flaw I have found so far, and I refuse calling it a serious one. In its own right this is a unique game, so go play it.
2008-07-03 02:23:57 by Ghost
I really enjoyed this game, and the graphics were fantastic. All in all, it was cute and fun.
2008-06-29 09:22:47 by Strange Visitor (Heromaker)
Fantastic game! Love the concept and it was very enjoyable to play.
2008-06-29 08:36:36 by Quinny
You must be logged in to the forums to post comments.
© Adventure Game Studio 2022. Page design by loominous and Darth Mandarb; coding by AGA.
Page generated on 22 Jan 2022 at 22:59:20