The Trials of Odysseus Kent 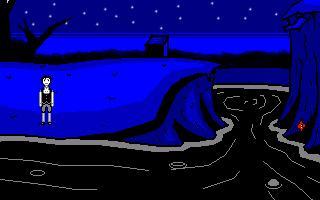 This game was hilarious. The puzzles weren't perfect, but the great humour more than made up for that.
2008-07-25 09:53:23 by F1ak3r
And now it was time for something completely different after I had finished the other serious Yahtzee adventures. This one, visually is mediocre (I don't care about few colors, but the sprite scaling was horrible as it moved far away) but doesn't spoil the fun. The riddles were crazy but somehow got me running around and seeing the solution. But great funny ideas. The best part of it is the dialogues and the insane humour. AMAZING STUFF!!!
2007-06-22 16:06:58 by Optimus
This game was great from start to finish! The graphics & animation are wonderful and the puzzles are challenging but not extremely difficult.

The only problem was the lame music but it was still a wicked game!!

Even better than Rob Blanc, which had me laughing so hard at points I almost hemorraged my eyeballs.

I envy this guy, he has mastered AGS.