Tales From The Outer Zone: The Construction
(12 downloads)

A Prelude to an Adventure
(4 downloads)

Awakening of the Sphinx DEMO 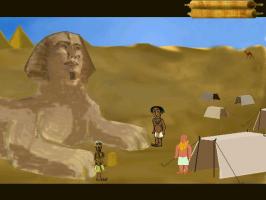 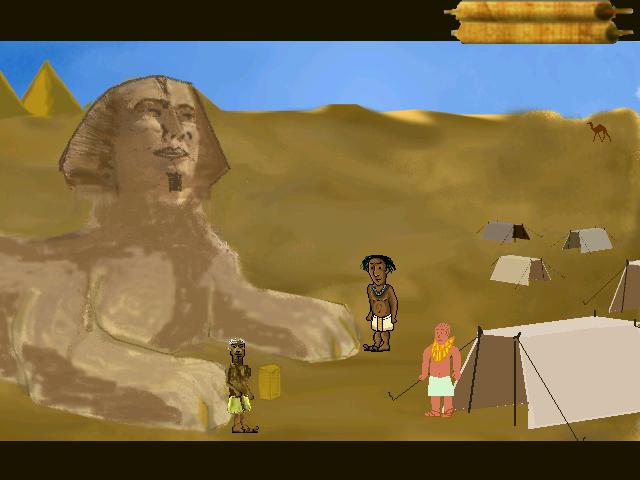 The 18th Dynasty of Egypt is one of the most eventful. Tuthmoses IV had a dream as a boy that if he uncovered the Sphinx he would become Pharoah. Later in the dynasty, Akhenaten rejected the traditional polytheistic religion of Egypt and turned to workship Aten. He built a new capital at Amarna and the period of him and his two successors is known as "The Amarna period". Many, however, were angry at this blasphemy against the old gods and seceretly fought against it. The game starts as our character, General Horemheb, a lowly born man who has worked his way up through the army, talks with Ay, Lord Vizier to the Pharoah, but secretly against his new religion. They discuss their feelings and Ay mentions that if the Pharoah was got rid of, he would become regent of the heir, Tutankhaten (Tutankhamun's name at the time) and could make Horemheb more powerful and grant him nobility if he helped him. So, with this in mind, he returns to the army camp near the Sphinx and goes to sleep. In his dream, he has a vision of getting up and the Sphinx talking to him, just as happened with Tuthmosis before him. The Sphinx tells him that the power of the Great Pharaoh Khafre, a great magician and builder of the second pyramid of Giza, will be his to command if he does as the Sphinx says. The Sphinx says that it is angry at the blasphemy of the Pharaoh and wishes to destroy him. It tells of a secret chamber in the second pyramid, never found by any thief who long since stripped the main chamber bare. So the adventure begins as Horemheb sets off to find the secret chamber and the secrets of power that lie within.
See the people who made this game and any other games they've worked on >>
SSH
Everything
50 other games: >>
Brothers & Wreckers (demo)
Credits module
Suspicious mind
Description module
10 Ways From Sunday
Credits module
Bustin' the Bastille
Description, Credits and Pixel Perfect Collisions modules
2034: A.C. (After Canada) II [Bake Sale 2]
Simple Snow Module
A night in Berry - long version
Description, zoom and credits modules
All pigs deserve to burn in hell
Description and Credits module
THAT DAMN DOG!
Credits Module
Dakota
Credit Module
Magic Owl
Simple snow module
The Cat Lady
SmoothScrollInv module
Agent Trinity - Episode 0 - The Ultimatum
Description module
Bolt Action
Description, Credits, and Pixel Perfect Collision Module Supplier
9 Months In
Credits Module
Princess Marian's Pigeon Pinger
Everything
OceanSpirit Dennis: A Ray of Hope
Credits Module
Robolution
Starwars scroller Module
Hitchhiker's Guide To The Galaxy Remake
Hypertext/GUI Portrait/QBSpeech
Secret of Hutton: Special Edition
MultiResponse Module
The Energizer
Walkcycle generator
AGS Awards Ceremony 2008
Compilation
Rock, Rock, Rock
Design, Programming, Modules
Craft Of Evil
Credits Module
Diamonds in the Rough
Additional scripting
Lost in the Nightmare: 'Save Our Souls'
Credits module
Lost In The Woods
Save Game and Yes/No Modules
Christmas Quest 3: Santa's Little Help Desk
Additional support
Princess Marian XI: Light re-leaf
Programming
The Seven Doors
Save Game and Yes/No Modules
STRANDED
Save/Load, Yes/No Modules
Roast Mother Goose
Yes/No, SaveGame, Quit Modules
Scared Stiff
Save/Load & Quit Modules
Tempus Fugit
Credits, Save/Load, and Yes/No Modules
Nelly Cootalot: Spoonbeaks Ahoy!
Beta Testing / Musical Continuity
Snakes on a Plane
the muthalovin lot
PMX: The Magic Hat
Writing, graphics
Princess Marian IX: The Phantom of the Ballet
Everything
SSH's Walkcycle Generator
Everything
Operation Save Blue Cup
Credits Module.
Fallen Angel
Credits Module.
A Day with Michael
Yes/no, Credits, Save/Restore Module
Princess Marian VIII: Snowfight
almost everything
C.U.T.E. The Marvellous Adventures of Princess Marian part VII
The whole bally lot
Pixel Hunt
Writer, Scripting, Voice acting
Princess Marian and the Fountain of Unicorns
most of the work
Alba the Explorer: Princess Marian part V
pretty much everything
The Dark Cave: Adventure of Princess Marian IV
everything
Buccaneer
Scripting help
The Adventures of Princess Marian II: Mother's Day
The Adventures of Princess Marian